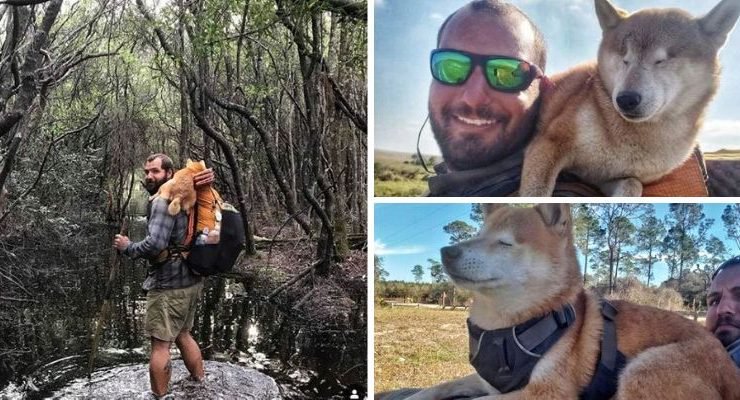 Kyle Rohrig recently did something few would even consider attempting. The experienced hiker embarked on a new kind of adventure when he brought along his 8-year-old Shiba Inu named Katana who happens to be blind.

Some backstory for our new followers! This is Katana, aka "CatFox" ( @adventures.of.catfox ). CatFox is her trail name and she's an 8 year old Shiba Inu. I've been her human for her entire life, and she has accompanied me on trail for more than 5,000 miles while being with me in spirit for many more. She developed Glaucoma and went blind in her left eye when she was 5, and had it removed a couple months later. The Glaucoma set in on her remaining eye when she was 7, and we had that eye removed shortly after she turned 8 years old. A little over a month later we began our 1,100 mile thru hike of the Florida Trail in a bid to gain her confidence back. After 2.5 months of nonstop hiking, we finished the Florida Trail with connected footprints and sky high confidence! Her favorite word is "treat." Her favorite sound is "plastic wrapper." And her favorite color is "food." I hope you all enjoy our adventures from here on out! You can read about our past adventures in the books we've written about them (link to first book in bio), or follow present/past/future endeavors (plus much more info) by checking out our blog "BoundlessRoamad.com" Thank you all for your continued interest and support in what we do and please don't hesitate to reach out with any questions! . . . . . #floridatrail #thruhiking  #travel #nature #adventure #wanderlust #photooftheday #picoftheday #dog #dogoftheday  #dogstagram #dogsofinstagram #doglover #campingwithdogs #hiking #backpacking #dogs #hikingwithdogs  #Shiba #ShibaInu #hikingdog #traveldog #adventuredog #animallovers #instadog #doglover #doglife #dogs #ilovemydog #petstagram

Rohrig and the pup aren’t strangers to hiking together. However, Katana began a journey of losing her vision during their last 2,650-mile adventure and along with it, she lost her confidence.

The two were on the Pacific Crest Trail when Katana’s left eye began showing signs of glaucoma. They were forced to stop hiking to address it. Nearly two years after an initial surgery to deal with her condition, Katana was now blind in both eyes and barely able to navigate their own home.

“At first she was very cautious and timid about doing anything,” Rohrig said. “She seemed unsure of herself.”

Rohrig was confident that Katana could learn to navigate their home by memorizing its layout, but he wasn’t ready for something so simple to become her reality. So he thought up a plan.

After having completed numerous thousand-mile hikes together years prior—and barely breaking a sweat while doing it—Rohrig hoped a 1,100-mile adventure would be just what he and Katana needed. He told the Dodo, “I had my eye on the Florida Trail for a couple of years, but never made any official plans to hike it. After Katana went blind, I thought it would be the perfect trail to help her really come to terms with her new circumstances.”

After taking a full 72 days to do it, the pair finished the trail in March after beginning on January 8. For 800 miles, Rohrig carried his four legged friend and, miraculously, Katana clocked around 200 miles on her own, transforming back into a confident, adventurous dog in the process.

“When I brought Katana out here it was either to sink or swim. The only catch being, I wasn’t going to let her sink,” Rohrig said of their journey that involved mud, water, alligators, snakes, and busy highways. “The Florida Trail was about as monotonous and grueling as it comes.”

“I don’t know exactly how she did it, but she could lead me down the trail perfectly, without hitting a single obstacle while accounting for every twist and turn in the trail,” Rohrig said. “Katana went from cautious and timid to confident and curious.”

“She loved every second of the freedom out there and getting to explore new places,” Rohrig said. “I truly think that’s every dog’s dream.”

Now that the pair is back at home, Katana is living life to the fullest. She jumps on and off the couch or bed with ease and darts in and out of the doggy door to explore the backyard when she pleases.

“She’s not just dealing with her new circumstances — she’s thriving, and she’s thriving wherever she goes,” Rohrig concluded. “We have many more adventures planned, and I’m going to keep taking her until she ceases to enjoy them. We’re both living the dream.”

Guy Carries His Dog 800 Miles After She Loses Her Sight

This guy carried his dog 800 miles to help her love hiking again ?