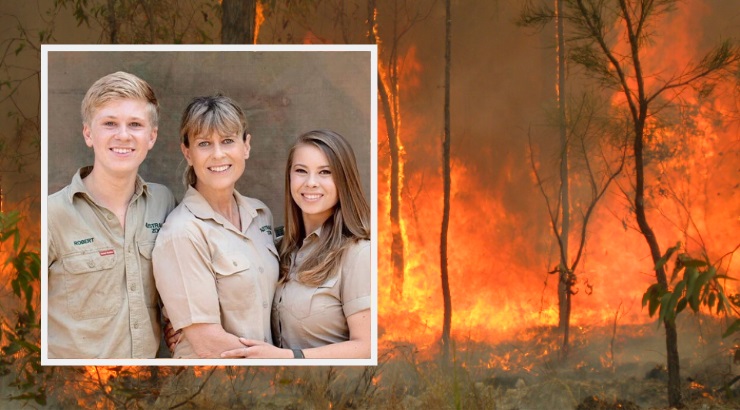 Australia’s bushfire crisis has ravaged local animal and plant life as ecologists warn that the potential loss of nearly 500 million mammals, reptiles, and birds—including 8,000 koalas—could devastate the country’s biodiversity in an unprecedented manner.

Despite the terrifying scope of the tragedy, Australians have stepped up in the thousands to confront the wave of fires by putting their lives on the line in volunteer firefighting brigades, donating to animal hospitals and charities, and working around the clock to mitigate the effects of the environmental disaster.

Among those brave workers and volunteers contributing to the fight against the fires is Bindi Irwin, the daughter of late TV personality Steve Irwin. The celebrated “Crocodile Hunter” was one of Australia’s most famed figures due to his passion for environmentalist and conservationist causes before he passed away in 2006 while filming an ocean documentary.

Steve’s 21-year-old daughter has now devoted her life to continuing the family’s multi-generational legacy as “wildlife warriors” especially during the current crisis impacting animals across the country.

On Thursday, Bindi revealed on Instagram that she has been working hard alongside the staff at Australia Zoo to help treat a record-breaking influx of animal patients wounded in the firestorms. She wrote:

“With so many devastating fires within Australia, my heart breaks for the people and wildlife who have lost so much. I wanted to let you know that we are SAFE. There are no fires near us @AustraliaZoo or our conservation properties.

We will continue to honour her by being Wildlife Warriors and saving as many lives as we can.”

With so many devastating fires within Australia, my heart breaks for the people and wildlife who have lost so much. I wanted to let you know that we are SAFE. There are no fires near us @AustraliaZoo or our conservation properties. Our Wildlife Hospital is busier than ever though, having officially treated over 90,000 patients. My parents dedicated our Australia Zoo Wildlife Hospital to my beautiful grandmother. We will continue to honour her by being Wildlife Warriors and saving as many lives as we can. 💙🙏🏼

The Australia Zoo Wildlife Hospital has been run by Bindi’s mother Terri Irwin since Steve’s death. According to a Yahoo Lifestyle report last month, the zoo typically treats over 8,000 sick and injured native animals per year. However, the zoo has been inundated by animals affected by the wave of bushfires raging across the country since September.

Bindi’s post comes as footage emerged showing dozens of kangaroos fleeing for their lives from the bushfires ravaging the state of New South Wales (NSW).

In the video, a large group of kangaroos can be seen hopping away in desperation across the parched grasslands near Bredbo, NSW.

Dozens of kangaroos have been spotted hopping through smoky grassland in Bredbo, NSW as nearby bushfires burn through the area #AustralianFires pic.twitter.com/xNP1EuBOEl

Ecologists fear that the enormous loss of wildlife due to the current crisis could forever tip the balance for entire species of animals and plants. Kangaroos, koalas, wallabies, wombats, echidnas, possums, and other endemic species have been lost in numbers that remain difficult to gauge due to the ongoing crisis.

Koalas, in particular, have sustained huge losses—with some experts warning that an estimated 30 percent of the koala colony has been lost in the fires on the northeast coast.

Thanks to everyone who’s asked how we’re doing in this severe bushfire season. The Sunshine Coast is not currently experiencing any fires. Our 497 staff are SAFE. @AustraliaZoo is SAFE. Our conservation properties are SAFE. We are treating more animals at our Wildlife Hospital. pic.twitter.com/RrcqBQ9UyO