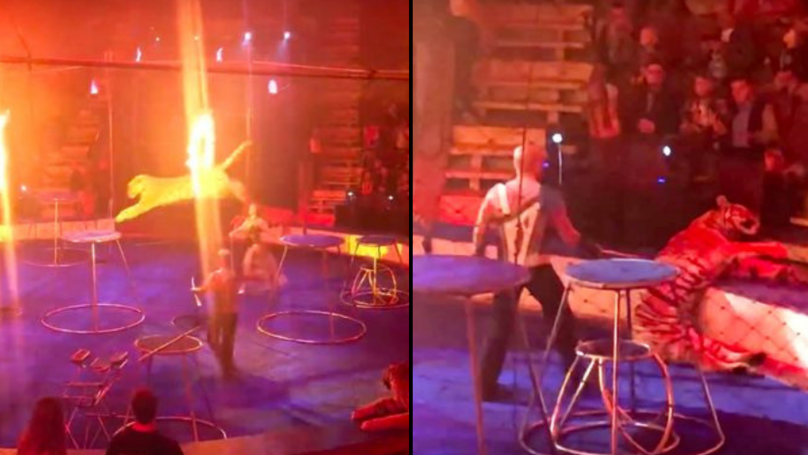 Is humanity not over the concept of circuses? Apparently not, because all most people do is be distracted by bread and circuses.

After being forced to jump through a flaming hoop, a regular thing that circus animals do as you’ve probably heard, a disturbed crowd had to watch the tiger have a fit of convulsions and collapse.

A six year old tiger named Zena was forced to perform in a show that was led by Artur and Karina Bagdasarov, a brother-sister duo, at a circus performance in Magnitogorsk, Russia. A horrible video (Below) was captured, that shows the tigress suffering from convulsions on the side of the ring, obviously in a lot of pain.

Instead of doing any number of other things, Artur uses a big stick as a whip to keep six other performing tigers away from the wounded one.

To jolt the collapsed, probably abused tigress to life, Artur poured water on her in what seem to be failed efforts, before deciding to carelessly drag the tiger out the ring by her tail.

The two have obviously been accused of animal cruelty since the alarming incident, but they defended what they did by acting as if the main problem was the stick, so they just stated using the stick against other tigers was necessary because they “feared the six other tigers would attack Zena.” Sure, but why would you drag the abused, injured tiger out of the ring by her tail, and what the hell caused that animal to suffer from convulsions?

Karina shamelessly defended her brother, saying: “Artur did his best to bring Zena back to her senses and he did all the right things – he touched her reflexive zones, he poured water on her. The main thing was to stop other animals from attacking. For them a weak animal is a target, it is an order to kill.

If we had not stopped them, it would have ended with a bloody fight. And nobody knows who would have been alive after that.”

According to one article:

“In the video Zena does eventually come round after suffering what is believed to be an ‘epileptic fit’. Artur went on to say he had no choice but to pull Zena by the tail.”

Artur justified what he did, saying:

“I had to drag the animal away from the wire fence, she was about to fall between the stage and the wire. I dragged her to a safe place where there were no other tigers around. Any other tiger could have attacked her when she was so weak. Karina was controlling six animals so they did not do any harm to the tigress.

So the tigress was away from spectators and away from other tigers. Why the tail? What else could I drag her by? She has claws on her paws. She is not a soft cat. I could not lift the whole tiger. It was an emergency situation for all of us. It was a shock.”

Okay, it was an emergency situation for all of you, shocking, because you decided to make a living off of forcing captive animals to jump through hoops of fire while apparently not caring after their health well enough to prevent them from collapsing mid-routine. No sh** it was an emergency, why did you put these tigers together and decide to profit off of this?

Even worse, a horrible reaction from the crowd was observed when some onlookers heard cruel laughter as the lion collapsed. Some people in the crowd also cheered when the tiger stood up and was safe.

One onlooker, a woman named Larissa who took her children to the circus said: “When the tiger was convulsing, spectators laughed. When the animal defecated, it became clear it was an attack of an illness. Both animal trainers behaved normally, the sister [Karina] was watching the other animals. The brother controlled everything and helped the tigress. There was no stun gun. Artur beat his whip at the floor to calm down other animals.”

Larissa, do you think it’s a good idea to use a stun gun on an animal suffering from convulsions, where electricity already races through the brain and the nervous system is in bad shape? Maybe you meant use one against the other tigers. Still doesn’t sound like a good idea for a circus to exist at all.

There’s one thing that could have caused these convulsions, and it’s given to dogs and possibly even tigers.