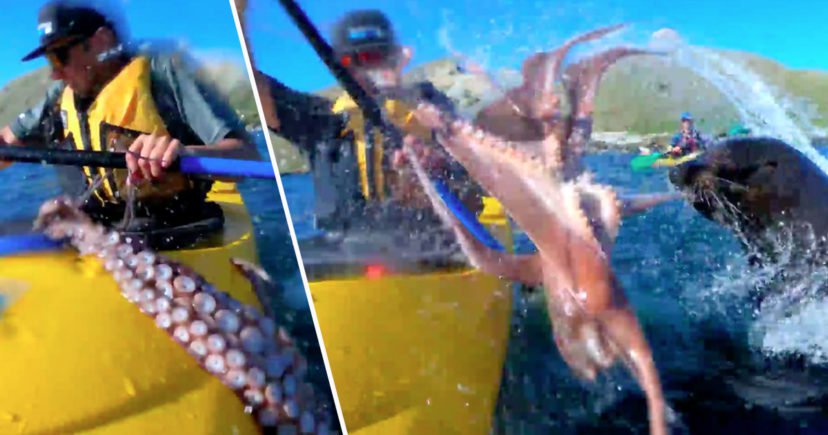 Off the coast of Kaikoura, on New Zealand’s South Island, one man captured a moment straight out of a movie on his GoPro HER06 camera.

Taiyo Masuda managed to capture an animal slapping a man in the face with another animal.

Floating gently along to the motions of a group of kayaking tourists, a seal emerges straight out of the ocean and slingshots an octopus at Kyle Mulinder. One article reports:

“Ever got the feeling you’ve outstayed your welcome? So much so, in fact, that someone has started throwing things at you until you leave? Me neither, I never stay anywhere long enough for that feeling to develop. I actually often don’t go to places on purpose just to make sure that doesn’t happen. You can’t outstay your welcome if you were never there. One kayaker, however, got a pretty obvious hint from a seal that he should get out of the ocean. There’s nothing like a slap in the face to deliver a message.”

In a statement to Yahoo7, Kyle, the victim of the slap said: “We were just sitting out in the middle of the ocean and then this huge male seal appeared with an octopus and he was thrashing him about for ages.”

The man who was slapped silly said that a fight took place between the octopus and the seal, and they disappeared beneath the water out of sight, before popping back up out of the water with a surprise, only to catch Kyle in the crossfire, with the seal whipping the octopus straight into his face like a slingshot.

“He thrashed it in mid fight and my face happened to be in the wrong place at the wrong time.

I was like ‘mate, what just happened?’ It was weird because it happened so fast but I could feel all the hard parts of the octopus on my face like ‘dum dum dum’.”

You thought it was over? That wasn’t the only thing that happened. The fight between those two sea creatures continued, as the suction-armed octopus managed to attach itself to Kyle’s kayak. He was only able to pry the octopus away from it with the help of other people surrounding him.

Have you ever seen what an octopus is actually capable of? Put one in a boat, and if there is one tiny, minuscule crack or gap anywhere in the boat, that octopus will squish it’s body thinner than you thought was possible and escape through it.

To explain the phenomenon of an octopus’ ability to escape anything, one article says:

“What makes octopi—ugh, octopuses—different is they are actively good at escaping, because they are intelligent. “In the wild, octopuses use coconuts to hide in, save and use them again, showing active tool use. They solve puzzles, open jars, and guard their dens in a way that shows a pretty high level of perceiving the world and responding to stimuli in a very directed manner,” says Annie Lindgren, a cephalopod biologist from Portland State University. So, while some people might interpret an octopus escape as a sad cry for help, it’s probably more likely the animal is bored, curious, and just plain hungry.”

Here is the video:

Another thing: don’t you think seals kind of look like little white dogs? I think white puppies and seals look a lot in common. Nature is beautiful.