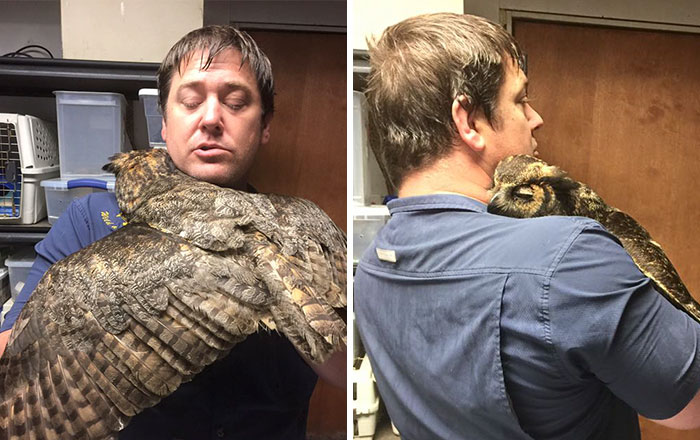 A Great Horned owl named GiGi was taken to Mississippi’s Wild at Heart Rescue after suffering significant head trauma. The specialists suspected she had been hit by a car, resulting in a massive concussion.

GiGi was not only riddled with parasites, she was found to have aspergillosis, which is similar to pneumonia in humans. Missy Dubuisson, the founder and director of the Rescue, told The Dodo:

“This bird was one of the most critical we have ever taken care of, the fact that this bird has lived is beyond comprehension.”

If it hadn’t been for Douglas Pojeky, president of the facility, GiGi may have never received the extensive care she needed. It seems the owl was well aware of this, as she quickly bonded to Pojeky, who is referred to as the “birds of prey whisperer” by rehabilitators in the area.

The owl displayed her affection for Pojeky when he arrived at the facility after a few days of being away. Reportedly, she moped during his absence, but rushed to greet him when he returned. GiGi rested her head right on his shoulder – and wrapped her wings around him.

“It literally brings tears to my eyes to watch him interact with these birds. They absolutely know him and trust him. It’s the trust that you see in her face.”

This article (Owl Can’t Stop Hugging The Man Who Saved Her After Car Accident) is free and open source. You have permission to republish this article under a Creative Commons license with attribution to the author and TrueActivist.com