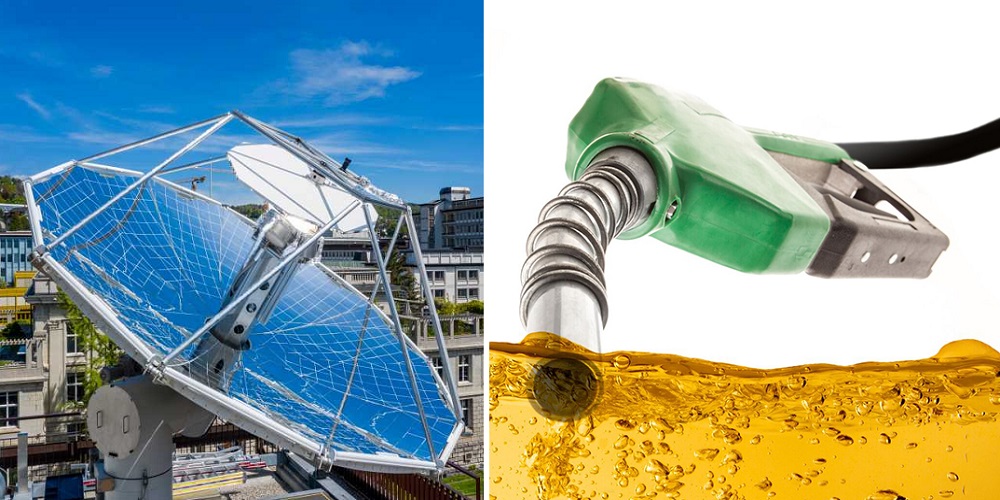 A team of researchers from the Swiss Federal Institute of Technology Zurich (ETH Zurich) has created a potentially revolutionary carbon-neutral solar mini-refinery that produces liquid hydrocarbon fuels using ONLY sunlight and air.

The new solar mini-refinery, a global first, is located on the roof of ETH’s Machine Laboratory building in Zurich. It produces liquid hydrocarbon fuel using thermochemical processes, which they have just demonstrated under real field conditions.

According to the researchers, the process chain of the new system consists of three thermochemical conversion processes: extraction of CO2 and water from the air, solar-thermochemical splitting of CO2 and water, and their liquefaction into syngas – a mixture of hydrogen and carbon monoxide that is subsequently processed into kerosene, methanol or other hydrocarbons.

“CO2 and water are extracted directly from ambient air via an adsorption/desorption process. Both are then fed into the solar reactor at the focus of a parabolic reflector. Solar radiation is concentrated by a factor of 3,000, generating process heat at a temperature of 1,500 degrees Celsius inside the solar reactor. At the heart of the solar reactor is a ceramic structure made of cerium oxide, which enables a two-step reaction – the redox cycle – to split water and CO2 into syngas. This mixture of hydrogen and carbon monoxide can then be processed into liquid hydrocarbon fuels through conventional methanol or Fischer-Tropsch synthesis,” explained the researchers.

These synthetic liquid fuels, which release as much CO2 during their combustion as previously extracted from the air for their production (hence the tag ‘carbon-neutral’), are ready for use in the existing global transport infrastructure, making aviation and maritime transport sustainable. Phys.org writes:

“Compared to conventional fossil-derived jet fuel, the net CO2 emissions to the atmosphere can be reduced by more than 90%. Furthermore, since the solar energy-driven process relies on abundant feedstock and does not compete with food production, it can thus meet the future fuel demand at the global scale without the need to replace the existing worldwide infrastructure for fuel distribution, storage, and utilization.”

The transition from fossil to renewable fuels is one of the most important challenges of the future. The new renewable technology can produce car and plane-ready fuel from nothing but sunlight and air, a discovery that has potentially big consequences for the environment.

Aldo Steinfeld, professor of renewable energy carriers at ETH Zurich and head of the research group that developed the technology, remarked:

“This plant proves that carbon-neutral hydrocarbon fuels can be made from sunlight and air under real field conditions. The thermochemical process utilises the entire solar spectrum and proceeds at high temperatures, enabling fast reactions and high efficiency.”

Developed as part of the EU SUN-to-LIQUID project, the solar mini-refinery in Zurich – which produces around one decilitre of fuel per day – will soon be ready for large-scale testing in a solar tower located near Madrid.

The researchers are confident that the solar mini-refinery on the roof of ETH Zurich proves that the technology can be made industrially viable and economically competitive, even under the climate conditions prevalent in Switzerland. Philipp Furler, director of Synhelion, a commercial solar fuel production group, said:

“A solar plant spanning an area of one square kilometre could produce 20,000 litres of kerosene a day. Theoretically, a plant the size of Switzerland – or a third of the Californian Mojave Desert – could cover the kerosene needs of the entire aviation industry. Our goal for the future is to efficiently produce sustainable fuels with our technology and thereby mitigate global CO2 emissions.”