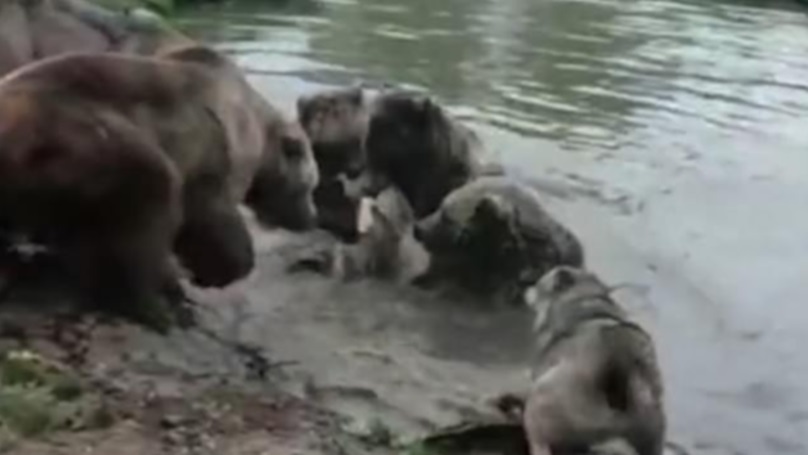 It seems like there is a lot of negativity placed everywhere we look, when it comes to fiction, or when it comes to news headlines. Articles circulate about different moments when animals come into dangerous encounters with other creatures, sometimes the stories are interesting or harmless, but other times it gets brutal.

Although indescribable feelings of goodness and love can also be found in what we call nature, it’s easy for the negative side of it to be emphasized. Unfortunately in this story, that’s exactly what happened.

Recently, it was reported that a wolf was harmlessly playing with the rest of its pack at the Netherlands Dierenrijk Zoo. Then out of nowhere, somehow it managed to fall into the water, and the poor creature was torn apart by a group of bears.

There’s no reason anybody should want to see this really, it’s just terrible. There’s only one question that could really be asked by any person who loves animals and doesn’t want to see this happen: where were the people keeping those animals apart?

Why were those wolves allowed to fall into the same place the bears were, why wasn’t there something protecting the two top-of-the-food-chain fighters from ripping each other apart? People seem to be getting less good at everything, without a doubt. These days it feels like people let their guard down and become vulnerable far too easily, and those who don’t unfortunately often aren’t very good people either.

One of the wolves passed away, and articles about this don’t seem to have a lot of empathy about it. One from Lad Bible reads:

“Despite one of the wolves being killed, it was a vital chance for the visitors and the staff to see nature in true form, as well as the wolves trying to rescue another for the good of their pack. If there were any kids there, it will have taught them a valuable lesson – if they could look out from behind their hands, that is.”

Some hardships experienced in life make a person stronger and they really need that, but watching a poor animal get ripped apart? That can’t be good for anyone.

Let’s take this in a more positive direction. Just think about the fact that a bear exists: we live on a ball rolling through space, where furry, extremely formidable and dangerous slashing machines called bears roam around.

Some people who really love animals try to befriend bears and be close to them like a dog or pet, but sadly bears are far toopredatory to befriend as human beings. That has been proven when bear lovers had their lives taken, famously, in Alaska. Ever heard the story of Timothy Treadwell?

Speaking of bears in Alaska, two men were charged with illegally shooting and taking the lives of three Prince William Sound black bears earlier this year. The terrible crime was caught on camera, which included the man taking the lives of “the shrieking newborn bear cubs” to discard “their bodies away from the den,” according to Alaska State Troopers.

People had to retrieve the bodies of bear cubs that this guy took the lives of for absolutely no reason. Hunting is different and so is self defense, this reaches a different level of sadistic.

Learning about bears is still really interesting. It’s a great activity in general to watch videos about bears, wolves, whatever animal you want to learn about: hopefully not horribly violent videos though. So when you’re bored sometime, think of an animal, from dolphins to bears, just type them into a video hosting website and make your life more interesting.