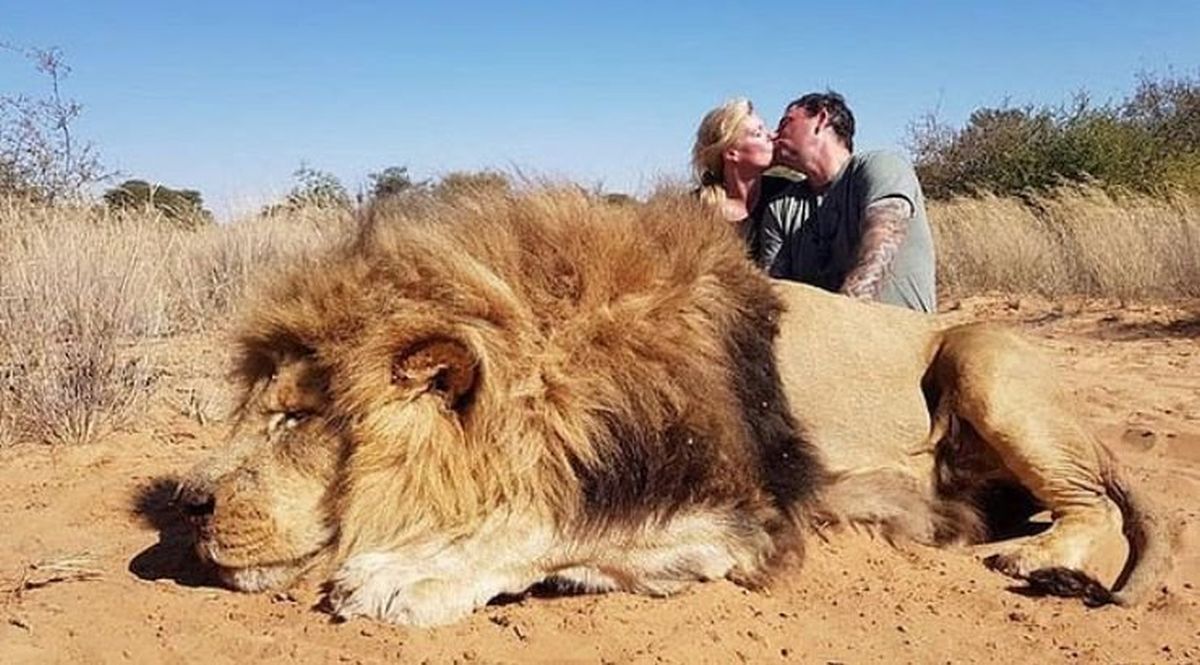 A Canadian couple, who posed for the camera minutes after killing a majestic lion on Safari in South Africa and celebrated the killing by kissing next to its dead body, has caused worldwide outrage.

In a now-deleted Facebook post, Legelela Safaris (a firm that allows hunters to kill giraffes, zebras, leopards, lions, rhinos and even elephants for over $3,000) praised Darren and Carolyn Carter for hunting ‘King of the Jungle’ in the photo caption, saying:

“Hard work in the hot Kalahari sun Well done. A monster lion. There is nothing like hunting the king of the jungle in the sands of the Kalahari. Well done to the happy huntress and the team.”

The photo was widely condemned after it surfaced on social media as netizens called out the couple – who describe themselves as “passionate conservationists” – and labelled them as disgusting:

“Hunt”, actually hunt, for food not for fun. Killing a trapped animal isn’t hunting. People that do this make me sick. And angry. 🤬

I will never understand why people want to hunt these beautiful animals. They should get in trouble for this, The sad part is they have no remorse over it. Idiots

I hope someone hunts these people. Fair is fair 👍.

Humans are the worst!

what a disgusting couple killing this beautiful lion.

Eduardo Goncalves, who founded the Campaign to Ban Trophy Hunting, believes that the lion slaughtered by the couple was captive and bred on a lion farm for the sole purpose of being killed for cash by hunters:

“There is nothing romantic about killing an innocent animal. It looks as though this lion was a tame animal killed in an enclosure, bred for the sole purpose of being the subject of a smug selfie. This couple should be utterly ashamed of themselves, not showing off and snogging for the cameras.”

However, the couple, who runs a taxidermy business, remains unfazed and has refused to be drawn on the photos. Speaking to the Daily Mirror, Carter said: “We aren’t interested in commenting…it’s too political.”