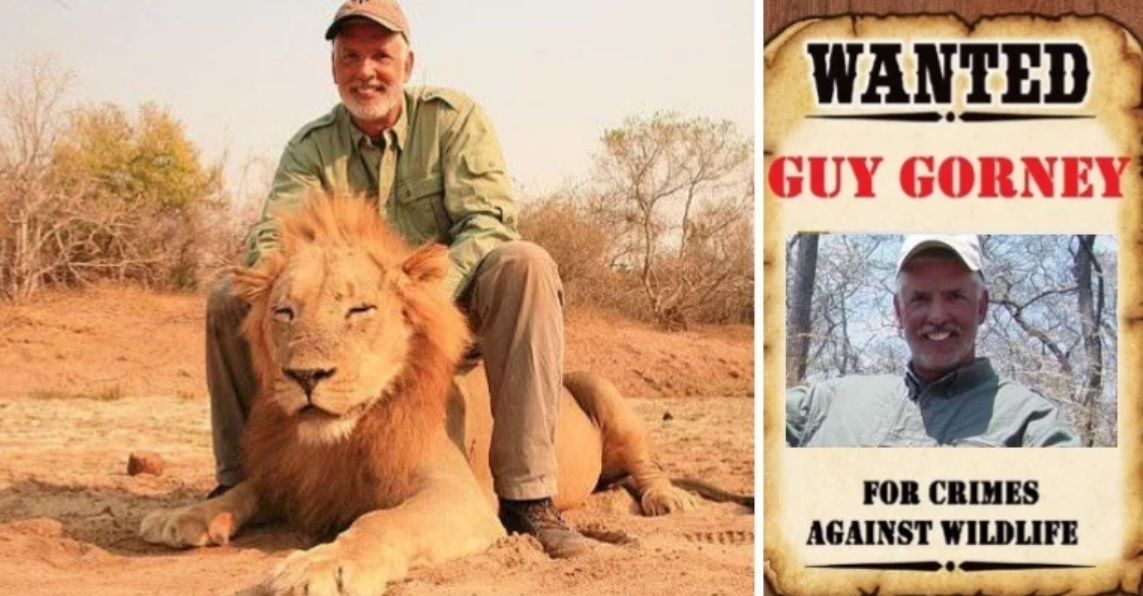 A clip of a trophy hunter killing a sleeping lion that was recorded in Zimbabwe in 2011 resurfaced this week after the Twitter account @Protect_Wldlife shared the video to their profile of over 335 thousand followers.

The video shows 64-year-old Guy Gorney of Manhattan, Illinois aim and fire on a sleeping lion.

This 'hunter' sneaked up on a SLEEPING #Lion and killed it!

How brave, how sporting – HOW CUNTISH!!!

According to the @NatGeo
magazine, the Lion will have disappeared from the African continent in 2050!!!! RT if you want a GLOBAL ban on ALL #trophyhunting NOW!! @RickyGervais pic.twitter.com/F5qcOpE0ix

In the video, the animal appears to be in pain as it gets up to look around and gauge where the attack came from, but before the animal could do anything, Gorney fired a second and third shot.

After the third shot, the guide that was escorting Gorney shouted, “OK, OK, don’t do any more!”

Gorney is a known trophy hunter who has found himself at odds with activists in the past. During a 2015 interview, Gorney said that he had no remorse for killing 70 “trophy” animals such as elephant, lion, leopard, rhino, and buffalo.

“I have a hard time understanding, if you have a picture of somebody with a deer, nobody seems to care. But if it’s an elephant, it’s a big problem. If it’s a lion – especially now – it’s a huge problem. But to me, either way, I’ve stopped a beating heart,” Gorney said.

Obviously, there is a huge difference between a deer and a rhino or elephant–deer are not endangered nor are they facing possible extinction. According to the African Wildlife Foundation, lions may very well go extinct by the year 2050 if the current rate of hunting and poaching continues.

In the past, Gorney has defended his actions by suggesting that he is simply doing his part in the food chain and that hunting predators actually protects weaker animals.

“You can say, ‘Why’d you shoot a lion?’ I love zebra, so shooting a lion probably saves 70 zebra a year, give or take. There’s all these kinds of balances in nature,” he said.

Gorney says that he likes the challenge of hunting large animals.

“I like pitting myself against these animals. And what greater trophy than an elephant? I really like hunting elephants. They’re difficult to track down. They’re incredibly dangerous. The first elephant I got, I walked over 120 miles tracking elephants before I actually caught up to him and found him.”

“The ‘why’ is just the—I call it the adventure of it. Same reason Teddy Roosevelt did it,” Gorney says.

Gorney’s current Facebook profile photo shows him with a dead lion, in the same clothes that he was wearing in the video. The caption reads, “in the Chewore river bed’ of Zimbabwe.”

The COWARD who shot a sleeping 'Lion in Zimbabwe has been revealed as remorseless #trophyhunter Guy Gorney, from Illinois. He was was branded a "scumbag" on social media, when footage released by @Protect_Wldlife showing him shooting the lion in Zimbabwe caused an online storm! pic.twitter.com/hDLxSWlvaU

Earlier this month, The Mind Unleashed reported that a 33-year-old man living in the Czech Republic was recently mauled to death by a lion that he kept in captivity. The man reportedly abused the lion, having had the police called on him several times for animal cruelty