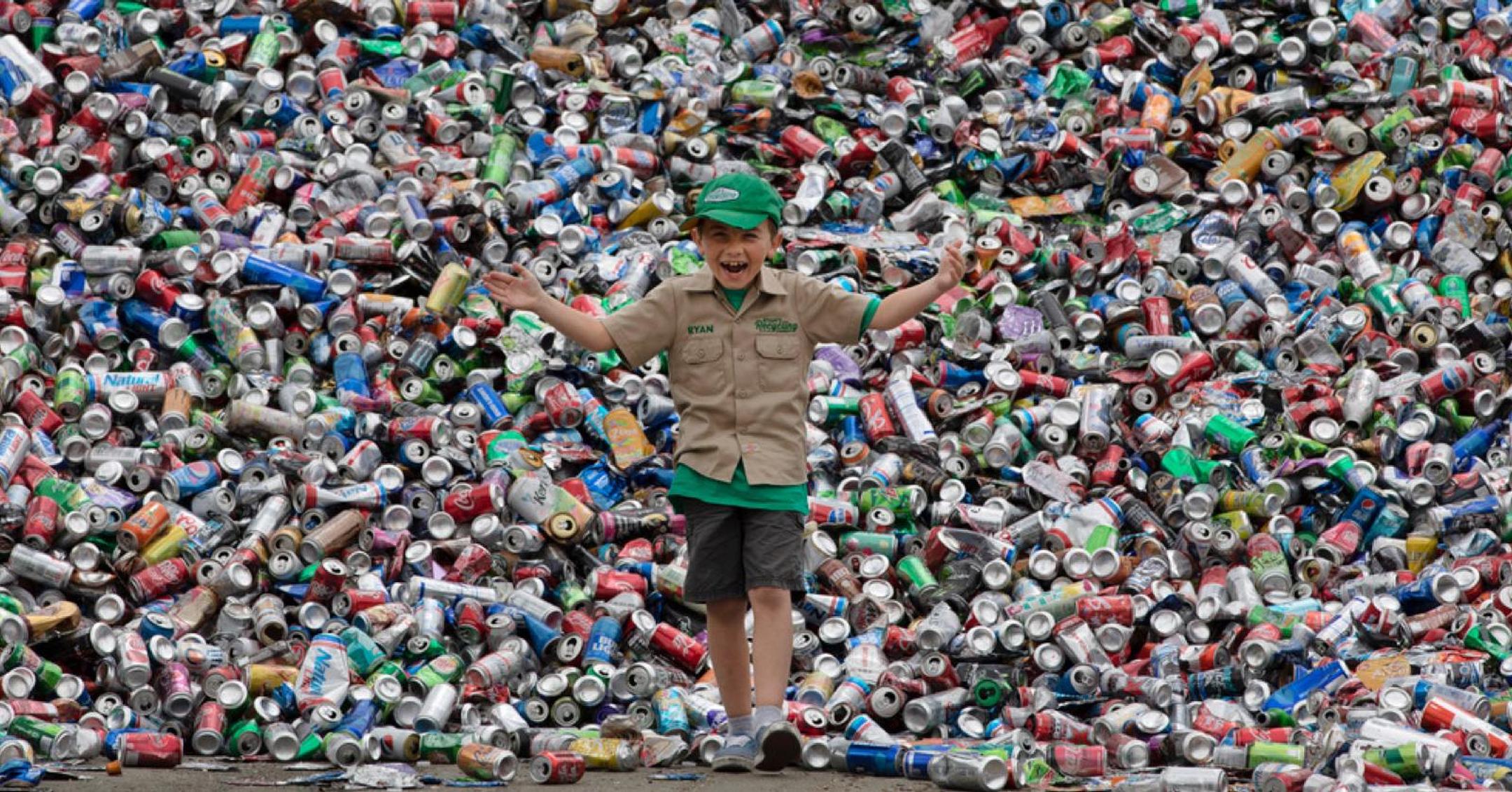 If you’ve ever used a recycling bin in the U.S., you’ll probably recognize Recycle Across America‘s standardized labels, which clearly indicate which recycling bins are for which items. The nonprofit is on a mission to get more people to recycle by standardizing recycling labels across the country. Over the years, the organization has teamed up with a few celebrities to help spread the message — but its latest spokesperson is the most exciting yet, since he is more experienced in recycling than most adults are. As Recycle Across America (RAA) announced in a press release, Ryan Hickman, the 9-year-old CEO of nonprofit Ryan’s Recycling, has officially partnered with RAA as a volunteer spokesperson.

Ryan founded Ryan’s Recycling in 2012, when he was just 3 years old. Since then, he has collected and recycled more than 500,000 cans and bottles. Ryan’s Recycling went viral in 2016, and since then, he has talked about his business on shows including The Ellen DeGeneres Show and Good Morning America. Taking his success as a recycler into account, Ryan is clearly the perfect person to help RAA standardize recycling nationwide.

“I think it’s very important to standardize recycling labels because that way people won’t get confused on what they can or can’t recycle,” Ryan tells Green Matters in an email. “When we all recycle correctly, there will be less in the landfills and less trash in with the recycled items. Recycling right is easy. If a 9-year-old kid like me can do it, anyone can do it.” 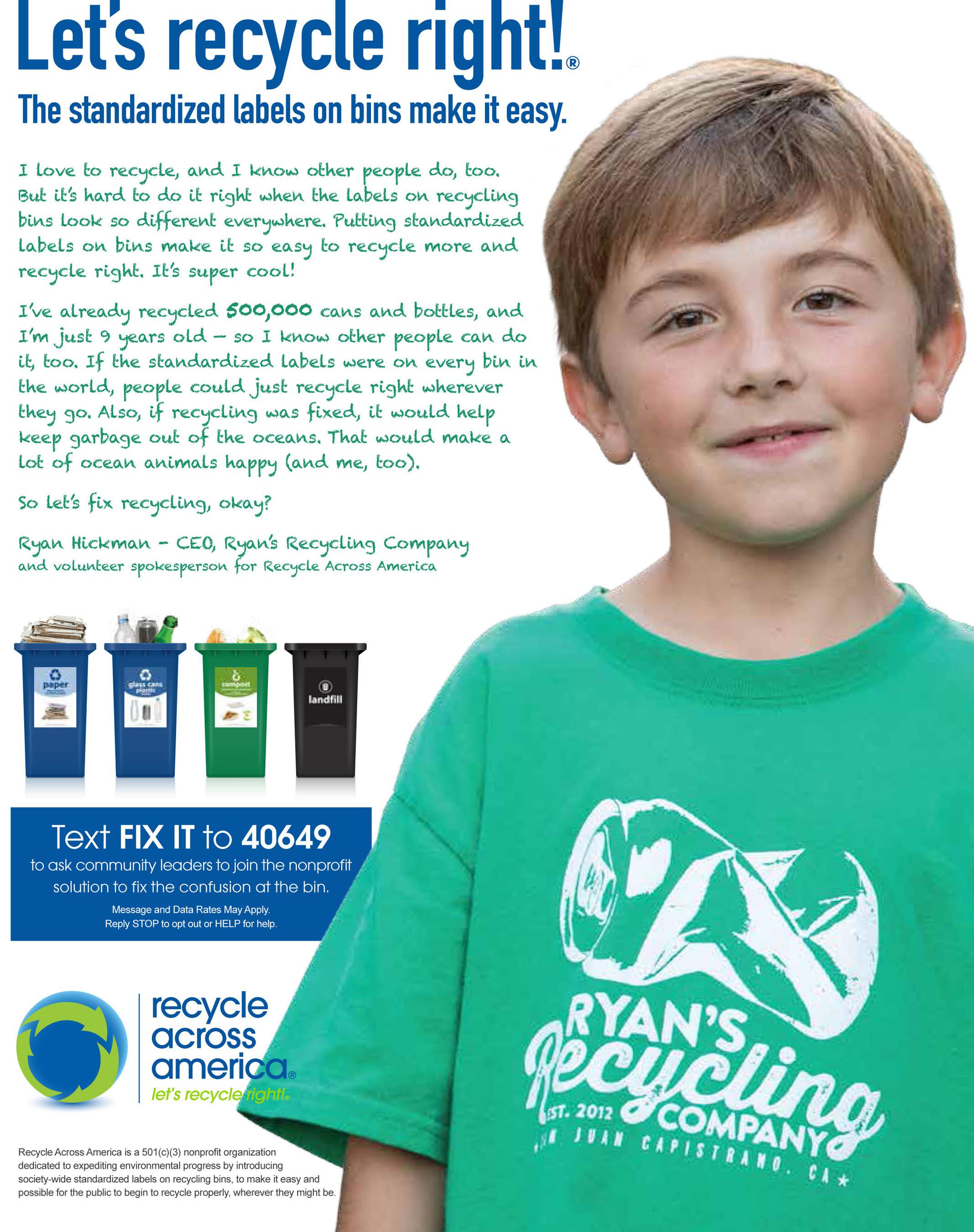 Green Matters also spoke with Andrew Ruiz-Hays, RAA’s Director of Strategic Alliances, to learn about why the organization chose Ryan as a spokesperson. “Having the voices of youth involved in environmental solutions is where, I believe, progress will be expedited,” she tells Green Matters in an email. “Kids are smart! They see things simply and are not conflicted or compromised. They garner the attention of the world with their passion, and they should, because pretty soon it will be their world — solely.”

“This is Ryan … He sees recycling simply,” Ruiz-Hays continues. “He knows it’s important to do correctly — to get these things back to manufacturers to reuse. It’s good for the economy, the oceans, and sea life. But Ryan has witnessed that it’s too confusing to do correctly.”

“We are providing people a direct way to communicate with community leaders as well as leaders in important industries: waste and recycling, packaging, and consumer brands,” Ruiz-Hays also tells Green Matters. She added that if people want to ask their national and local leaders to join the FIX IT mission, they can text “FIX IT” to 40649 to get started.

According to a report published by the EPA in July 2018, only 9.1 percent of the country’s plastics were recycled in 2015. Despite those low rates, the U.S. was so overwhelmed with the amount of plastic recycling, that for more than 25 years, the U.S. (as well as other countries) has sent tons of plastic recycling to China, NPR reported. But in 2018, China stopped accepting plastic waste — and as Amy Brooks, who published a study on the topic, told NPR, recyclable plastic is now “ending up in landfills, being incinerated or sent to other countries ‘that lack the infrastructure to properly manage it.'”

If Ryan’s dedication has got you feeling jazzed about recycling, there are a few easy ways to get involved with improving recycling rates in the U.S. For one thing, you can try to avoid plastic bottles in favor of aluminum, glass, or bulk shopping, since the U.S.’s plastic recycling is not reliable. Additionally, the Take Action page of RAA’s website details three steps concerned recyclers can take.

You also can purchase RAA’s standardized recycling labels for your home or business, or request your place of work or school purchase a set of labels. (Most of the labels cost between $1 and $3.) This will help reduce confusion around recycling, ensuring that more people do it correctly. RAA also suggests asking your local leaders to institute RAA’s standard labels across your city, and donating labels to grade schools.

And at the very least, if a child can recycle 500,000 cans and bottles all before his 10th birthday, you can find the time to rinse out your soda can and place it in the recycling bin instead of the trash can. That’s not a bad place to start.