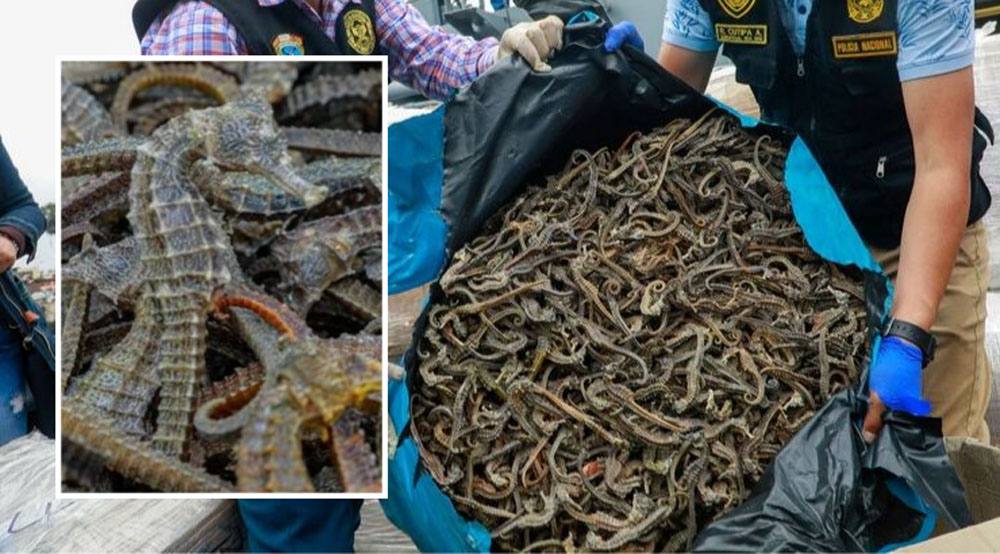 The cargo of more than one ton of this marine species is valued at approximately US $ 6 million in the international market, prodominantly used in Chinese medical industry.

Authorities in Peru have captured a ship that was carrying a massive illicit haul: over 12.3 million illegally caught seahorses worth over $6 million that was destined for Asian markets.

Once authorities boarded the ship, they found 55 boxes filled with the dehydrated bodies of the small marine creatures in a load that weighed over 2,300 pounds.

The four crew members detained, including three Peruvians and one Venezuelan, will face anywhere from three to five years in prison.

Seahorses are a protected species in the South American nation. Fishing, transporting, and engaging in the trade of seahorses has been illegal in Peru since 2004.

Out of an estimated 55 seahorse species, 11 are classified as “Vulnerable” and “Endangered” under the International Union for Conservation of Nature Red List of Threatened Species.

The illegal extraction of seahorses from fragile marine zones does great harm to not only the threatened species but also places great pressure on sensitive marine habitats in general.

Since China and Vietnam introduced market reforms in the late 1980s, the demand for marine specimens including seahorses and sharks boomed as fishermen sought their fortunes in seas around the world, depleting marine populations from West Africa to Southeast Asia.

According to CNN, abundant amounts of dried seahorses can be found in the markets of Hong Kong, where the small fish is seen as having “Viagra-like” powers. The World Wildlife Fund reports:

“Seahorses are believed to have over 200 therapeutic properties and with powers to rival those of ginseng. They have been used for over 2000 years to treat a range of illnesses including asthma, arteriosclerosis, incontinence, difficult childbirth and impotence.

The popularity of seahorses as medicine is driving the widespread sale of the animal in Taiwan, Indonesia, China, Hong Kong and other Asian countries. Harvesting undersized seahorses leaves them with no chance to mature and breed. Worse, overexploitation has driven some seahorse species into local extinction.”

The Peruvian National Police—who worked alongside the General Directorate of Captaincy and the Coast Guard, along with the Ministry of Production—had been closely monitoring the extraction of the seahorses from coastal waters for days before moving to detain the vessel and its contents.

The authorities have announced that they will donate the captured seahorses to research groups and local universities.