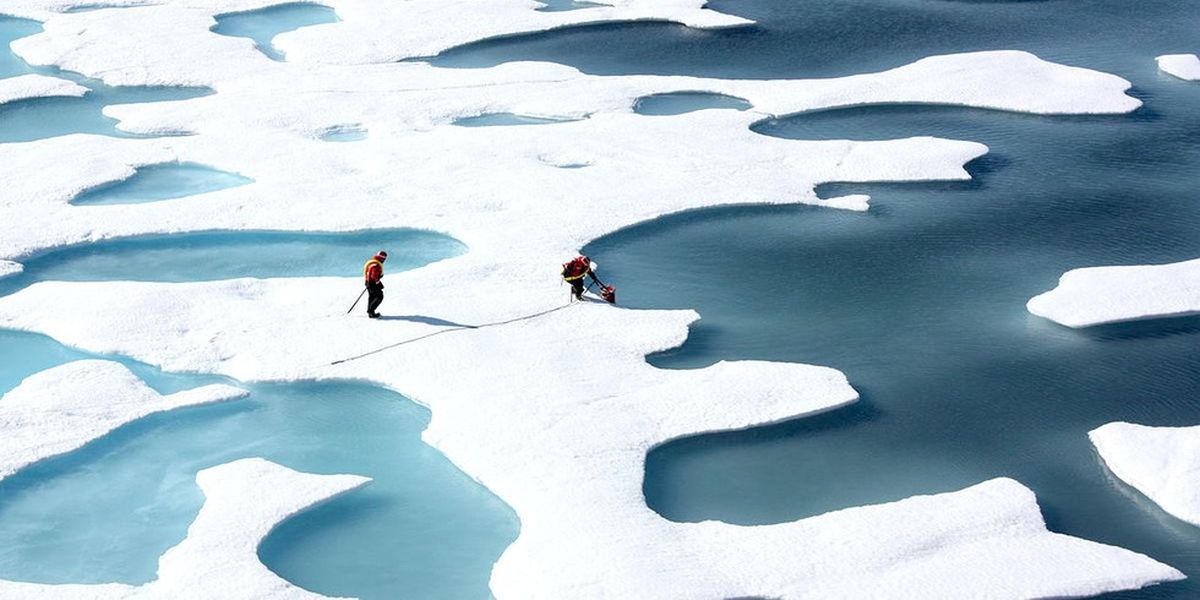 With temperatures near the North Pole hitting an unprecedented 20°C warmer than average last year and ice levels hitting a record low, they warned the Arctic meltdown had already kick started abrupt changes in the planet’s swirling atmosphere, bringing extreme weather in heavily populated areas to the boil.

Fearing the increasingly rapid melting of the ice cap risks triggering 19 tipping points in the Arctic that could have catastrophic consequences around the globe, scientists at Arizona State University have announced a plan to refreeze the Arctic — by installing 10 million wind-powered pumps over the Arctic ice cap. These would then disperse sea water onto the surface of the ice where it will freeze as an extra layer and thicken up the ice cap, at a staggering $50 billion per year over ten years.

“As the Earth’s climate has changed, Arctic sea ice extent has decreased drastically. It is likely that the late-summer Arctic will be ice-free as soon as the 2030s. It is unlikely that CO2 levels and mean temperatures can be decreased in time to prevent this loss, so restoring sea ice artificially is an imperative.

“We propose that winter ice thickening by wind-powered pumps be considered and assessed as part of a multipronged strategy for restoring sea ice and arresting the strongest feedbacks in the climate system.”

Physicist Steven Desch and his team argue the wind-powered pumps could add an extra meter of sea ice to the Arctic’s current layer, which rarely exceeds 2-3 meters in thickness and is being eroded constantly as the planet succumbs to climate change. Desch told The Observer:

“Thicker ice would mean longer-lasting ice. In turn, that would mean the danger of all sea ice disappearing from the Arctic in summer would be reduced significantly. It is an astonishing sum. However, it is the kind of outlay that may become necessary if we want to halt the calamity that faces the Arctic. Our only strategy at present seems to be to tell people to stop burning fossil fuels. It’s a good idea but it is going to need a lot more than that to stop the Arctic’s sea ice from disappearing.”

According to the full report, published in Earth’s Future, the team predicts that pumping 1.3 meters of sea water onto the icy surface over the course of an Arctic winter will result in the ice being thicker by 1 meter. Given that the mean annual thickness of Arctic ice is close to 1.5 meter, they claim, this represents a significant (70% increase) thickening of the ice. Desch told The Daily Mail:

“The scale of climate change and associated problems is so large it paralyzes us into inaction. But we can make real progress in the Arctic by putting people to work and using just a fraction of the industrial capacity that accidentally caused climate change in the first place.

“Maybe trying to make more ice in the Arctic using windmills and pumps and hoses is a crazy idea, but what’s really crazy is doing nothing while the Arctic melts. We hope to provoke discussion and action. Whether we choose to be in or not, we’re in charge of the climate now, so let’s all do the best we can.”

According to the scientists, adding 1 meter of ice in one year would reset the clock to the present day, instead of the largely ice-free summer state one expects by the 2030. Therefore, they assert, the deployment of devices over 10% of the Arctic, at $50 billion per year, is actually economically quite tractable.

“$500 billion per year represents only 0.64% of current world gross domestic product (GDP) of $78 trillion, 2.7% of the current U.S. GDP of $18.5 trillion, or 13% of the current U.S. federal budget of $3.8 trillion. For comparison, every year the global automotive industry produces 90 million automobiles, and the U.S. automotive industry produces about 10 million vehicles and over $300 billion of revenue.

“Thus, deploying devices over the entire Arctic is an enterprise comparable in scope to the U.S. automotive industry, or the execution of the Iraq War, which is to say that it is expensive but is economically achievable.”

Do you think the crazy plan will curb the effects of climate change and save the Arctic? Please share your thoughts in the comment section below…