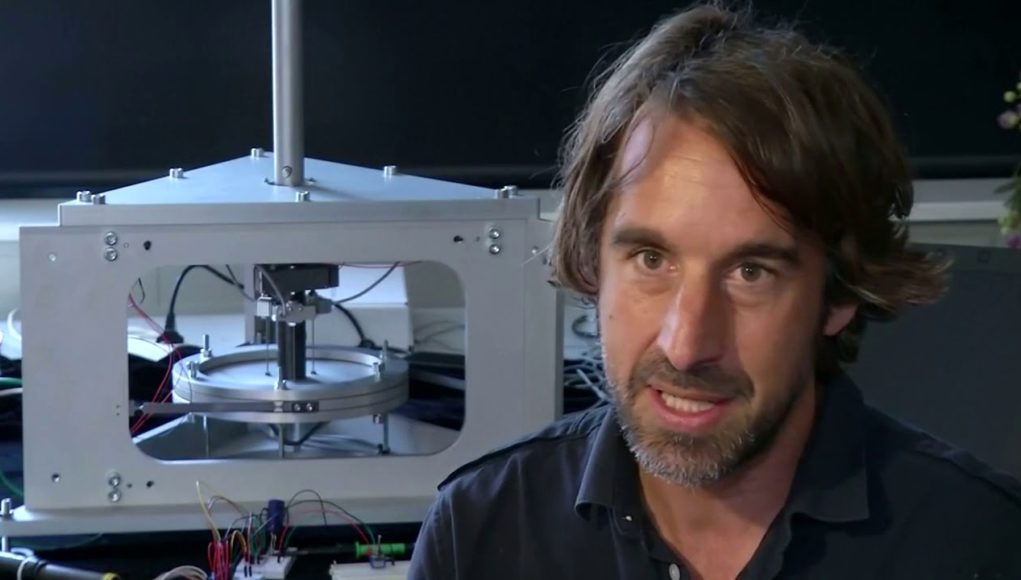 Janjaap Ruijssenaars is Professor of Architecture at the Royal Academy of Architects in the Netherlands.

He seems to have made a revolutionary invention: a machine that generates free and almost infinite energy from gravity. His small machine is already strong enough to power a small bulb. To “start” the machine, you just have to tap it.

How exactly Ruijssenaar’s new method works, however, becomes apparent only on closer inspection. It’s “a mechanism that generates energy by a weight that is in a permanent imbalance”. The inventor himself describes this as follows:

“WHEN A WEIGHT THAT IS VAGUELY BALANCED, IS BROUGHT OUT OF BALANCE WITH WITH A VERY LOW POWER, IT BECOMES A STRONG FORCE AT THE LOWER END OF A SINGLE POINT.”

In order to generate energy with this “strong force” created by gravity, Ruijssenaars’s new technique obviously uses the so-called piezoelectric effect. This was discovered at the end of the 19th century by the well-known physicists Pierre and Jacques Curie and is used today in many industries. For example, in the automotive industry, medical technology and telecommunications.

The principle of this method can be quickly explained: it can be used to convert mechanical energy into electricity. This works – in simple terms – by applying tension or pressure to so-called piezo elements, such as quartz or ceramics. This changes the polarization in the material and creates an electric field. Using electrodes, this field can be used to generate electricity. Systems based on this principle are called piezocransducers.

The gravity method Ruijssenaars uses for the production of electricity so a long-known principle. New, however, according to the inventor, is the significantly improved energy yield. Thus, the amount of charge generated by the piezoelectric effect so far are rather low and at most sufficient to operate small electrical components with a power of a few milliwatts, such as processors, sensors or mini transmitters.

Piezo converter – In the future, a higher energy yield

However, the “strong force” produced by Ruijssenaars using gravity, which exerts concentrated pressure on a single point, could significantly increase the energy yield of such piezo-transducers in the future. The system architect Theo de Vries, who has helped develop the new technology, therefore believes in a breakthrough. Thanks to the intelligent use of gravity, “the energy yield from the piezo method can be increased from 20 to 80 percent”. De Vries believes that whatever is currently offered as mechanical energy will prove useful because of this invention. The scientist Prof. Beatriz Noheda from the University of Groningen is also enthusiastic about the increase in efficiency through the new method.

She believes that the generation of piezoelectric energy will be part of our future.

“IN SITUATIONS WHERE THE USE OF SOLAR MODULES IS NOT SUSTAINABLE, WE MAY BE ABLE TO USE THIS NEW TECHNIQUE.”

Possible further applications of the new method, according to the inventors include the production of a sustainable and thus “clean” charger for telephones or a generator for homes for the production of electricity for lighting purposes. The patent for the new technology had already been applied for, the Dutch write.

Here’s a video Prof. Ruijssenaars demonstrating and explaining his invention (in German):