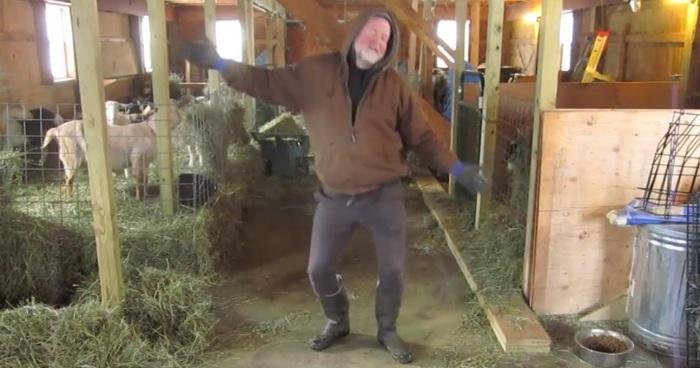 On December the 30th, Jay Lavery shared a positive video on his Facebook profile with his close friends. Little did he know that his video will be seen worldwide.

(You can watch the video bellow, but read his story first!)

The New York Farmer uploaded a video of him dancing in a barn to Sia’s song ‘Cheap thrills’.

Lavery is no stranger to stunts like this, he explained to The Huffington Post. He said he often does “crazy things,” which he shares with his friends on Facebook, but he’s never before shared them on such a prominent stage.

The video went viral for all the right reasons. It’s not everyday usual video and it’s positive! At the time of this writing it has gained 12M views on his Facebook video.

The video was really entertaining, but that’s not the only thing that hooked people to look at it 12M times. It’s the story that goes with it.

He wrote down bellow the video:

“It’s that time of the year for the Lets Move Challenge. Dancing is how I stay warm in the barn and I never know when I’m going to break out into a dance. But what most people don’t know is that 15 years ago I had a traumatic back injury that caused me to have several back surgeries including a discectomy and a spinal fusion and never ending back pain. Dancing along with yoga and meditation are my only alternatives to pain medication. So I hope this can inspire anyone to move in spite of pain and I hope this puts a smile on your face for the New Year.”

Besides dancing and moving to the songs rhythm, he had a clear message to us all: “I hope this can inspire anyone to move in spite of pain and I hope this puts a smile on your face for the New Year.”

“We have the best community that you could ask for,” Lavery added. “I really lucked out.”

He also told the Huffington post that “While he said he is thrilled that his video may have inspired the millions of people who have viewed it, he hopes viewers might also tune into the farm’s mission — to help bring about an American food system that is more sustainable once they learn more about the man behind the moves.”

Bottom line is: whatever you are struggling with at this moment enjoy the life you’ve been given because that’s all you have left! It’s not about the destination… it’s all about the journey.

You can watch the uplifting and entertaining video below, we hope you enjoy it as much as we did and if so, share!