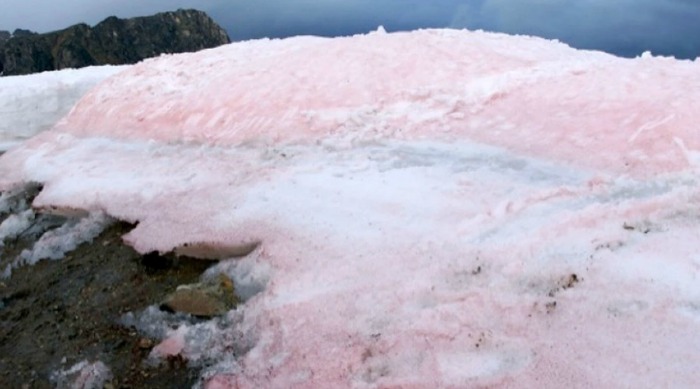 Scientists are worried that glaciers are melting faster, thanks to the Arctic snow that is turning pink at an unprecedented rate, thus, playing a bigger role in climate change.

Pink snow is beautiful but it is only another sign of #ClimateChange and a melting Arctic: https://t.co/wbEAurLyou pic.twitter.com/8aZj46IiiN

An analysis of 40 red snow samples collected from 16 glaciers and permanent snow fields indicated alarming conditions. The fields, in four well-separated Arctic locations — Greenland, Norway, Sweden and Iceland — and researched at the University of Leeds, has found that while pink snow is a natural occurrence caused by snow-dwelling algae, it is blanketing the Arctic at a faster rate than expected, indicating the rapid pace of global warming.

“Glaciers are important components of Earth’s climate and hydrologic system. The Arctic is being disproportionately affected by global warming, which in turn provides a strong feedback on the climate system. One of the key parameters in the increase of glacial melt is albedo change.”

Although scientists had already figured out why the snow is pink, the algae, which turn pink when they suck up ultraviolet rays during spring and summer blooms, is causing the Arctic snow to melt faster than its white counterpart. How?

At the Arctic, the University of Leeds scientists have discovered that these pink algal blooms are decreasing snow and ice albedo — how they reflect heat — by 13% over one melting season. When albedo is decreased, sunlight is absorbed instead of reflected; glaciers, snow and ice melt into water more quickly; cause more algae to bloom, making the planet hotter.

Snow in alpine-coastal areas can appear pink due to the fresh-water algae's red pigment tinting the snow pic.twitter.com/RB6Mu3m2sA

Even if the pink snow algae have a small influence on the Arctic ice cover today (and we all know that carbon gas emissions contribute to global warming), the Arctic could be in more serious danger than previously thought. The role of algae is likely to grow as human carbon emissions warm the planet.  Lead author of the study, Steffi Lutz, told Gizmodo:

“The algae need liquid water in order to bloom. Therefore the melting of snow and ice surfaces controls the abundance of the algae. The more melting, the more algae. With temperatures rising globally, the snow algae phenomenon will likely also increase leading to an even higher bio-albedo effect. Based on personal observations, a conservative estimate would be 50% of the snow surface on a glacier at the end of a melt season. But this can potentially be even higher.”

The unprecedented melt in the Arctic is NOT occurring naturally — it IS due to man-made global warming. The researchers conclude that it’s an example of how human—caused climate change functions on a positive feedback loop with other things in nature.

“As we infer from our data, melting is one major driver for snow algal growth. Extreme melt events like that in 2012, when 97% of the entire Greenland Ice Sheet was affected by surface melting, are likely to re-occur with increasing frequency in the near future as a consequence of global warming. Moreover, such extreme melting events are likely to even further intensify the effect of snow algae on surface albedo, and in turn melting rates.”