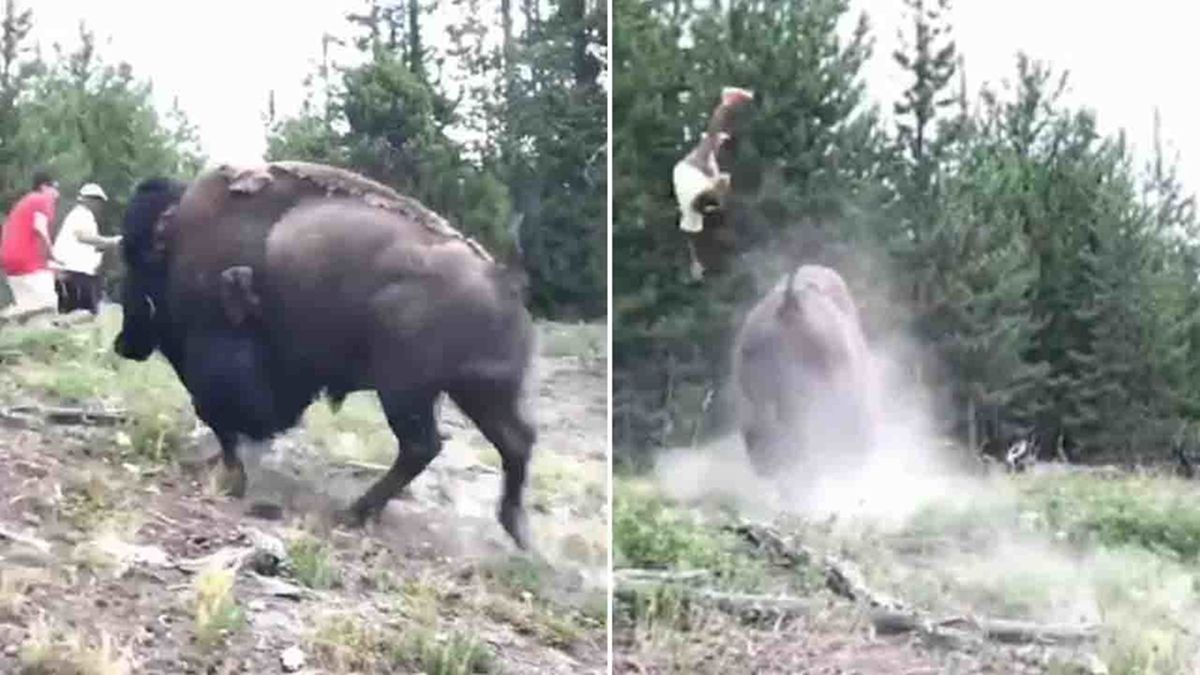 Dramatic video of a huge bison tossing a 9-year-old girl into the air at Yellowstone National Park in Wyoming has gone viral. The incident occurred on July 22 near the Old Faithful Geyser area of the park, where visitors often look at the world-famous hot springs.

Bystanders say the girl and her family were part of a group of nearly 50 visitors standing between 5 and 10 feet from the bison for at least 20 minutes before the wild animal charged the group. While the girl’s family members ran away along with others to save themselves, the young girl became the bison’s only target. Luckily, the girl sustained non-life-threatening injuries and was taken to Old Faithful Lodge where she was treated by park emergency medical providers. She was later released from the Old Faithful Clinic.

Hailey Dayton, 18, who filmed the incident ‘to show awareness of what can happen when you don’t properly respect the life you are around’ but later deleted it after her social media post was flooded with ‘cruel and inconsiderate’ messages, told NBC News:

“My brother and I were looking at the hot springs, and we saw a bunch of people running down the path to the bridge. We saw through the trees some people petting the bison, super close.  Because it was agitated by all the people and noise, it just kind of attacked. After that, everyone was screaming. There were a bunch of kids crying.”

Yellowstone – the first national park in the world – is home to an estimated 4,527 bison. A male bull weighs up to 2,000 pounds. The animals can be aggressive and can run up to 30 miles per hour. According to park regulations, visitors are prohibited from “willfully remaining near or approaching wildlife, including nesting birds, within any distance that disturbs or displaces the animal.” In a statement, the park urged visitors to maintain a safe distance from wild animals. It read:

“Wildlife in Yellowstone are wild. When an animal is near a trail, boardwalk, parking lot, or in a developed area, give it space. Stay 25 yards (23 m) away from all large animals – bison, elk, bighorn sheep, deer, moose, and coyotes and at least 100 yards (91 m) away from bears and wolves. If need be, turn around and go the other way to avoid interacting with a wild animal in close proximity.”

A 9-year-old girl was injured after being tossed into the air by a bison in Yellowstone National Park. https://t.co/UraNoyDyVP pic.twitter.com/ZKgTzXfQjj

As thrill seekers swarm public lands, thanks to the rise of social media, America’s national parks and public lands are facing a crisis of popularity and are under pressure. The Guardian reports:

“Backcountry trails are clogging up, mountain roads are thickening with traffic, picturesque vistas are morphing into selfie-taking scrums. And in the process, what is most loved about them risks being lost. Recent accidents and incidents involving animals and dangerous landscapes in the Grand Canyon, Yosemite national park, the Rocky Mountains and elsewhere have been blamed on risk-taking in a “selfie epidemic” and lack of regard for the land and the wildlife, also amid overcrowding at national parks.”