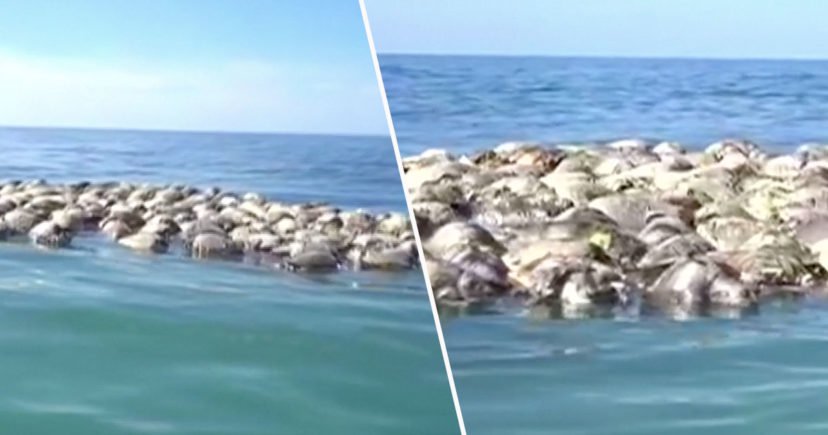 After apparently becoming entangled inside a fishing net, hundreds of turtles who belong to an endangered species list were found passed away off the coast of Oaxaca, Mexico.

It was announced by the Mexican federal agency for environmental protection that over 300 olive ridley sea turtles were found floating together trapped within the container, many of them suffering from cracked shells due to spending over a week trapped in the net, under the sun where they might not have been able to access the water they need.

The precise cause of the turtles to pass away is unclear, but many of them were observed to have injuries that seem to have been inflicted by fishing hooks and nets.

This sad news surprisingly comes just a few days after yet another 113 turtles were found with their lives lost, about 100 miles from the scene of the endangered turtles in the Mexican state of Chiapas, as reported by National Geographic.

As fishermen across the world try and harvest their choice creature from the sea, animals are caught and their lives are accidentally taken throughout the entire process.

A marine biologist who put nearly 20 years into the study of sea turtles, Bryan Wallace suggested that perhaps a “ghost net” was the cause of these Oaxaca turtles to pass away.

According to him, ghost nets are defined as “gear lost by its owner and not retrieved for one reason or another.”

A chain reaction is known to occur with these, as smaller animals get caught in the ghost nets, then larger predators may be attracted to them, and scavengers as well, all of them becoming susceptible to being trapped in the net.

The marine biologist said “To catch that many turtles means [the net] was probably fishing on its own for a good while, based on the level of decomposition evident in many of the animals.”

In Mexico these olive ridley turtles are marked as endangered, while in the US, the US Fish and Wildlife Service marks them as simply “threatened.”

“Despite the recent tragedy, the population of olive ridley sea turtles in the area is being managed well thanks to strict regulations put in place by Mexico and other states.

In fact, Bryan suggests Mexico’s southwestern coastline is a fertile breeding ground for this type of turtle, and the ones caught in the net could have been on their way to the beaches to mate.”

Well, it’s a little “boot-licking” to suggest “government” regulations are the thing that is going to save the turtles, but that’s where people have been conditioned to find solutions to problems.

“Olive Ridleys are easily the most abundant species in the region. So numerically speaking, this isn’t going to trigger a population collapse. It does, of course, act as an alarm bell.

This is a super complicated issue and there are a lot of communities, especially in Mexico, who do their best and are trying to do more, and they already live in a pretty challenging set of circumstances.

This is not a new thing. It’s just going to take a while.”

So it’s a good thing these turtles aren’t too endangered, but on a positive note, they are incredible creatures. They can live for up to 50 years, growing to about 2 feet in length.