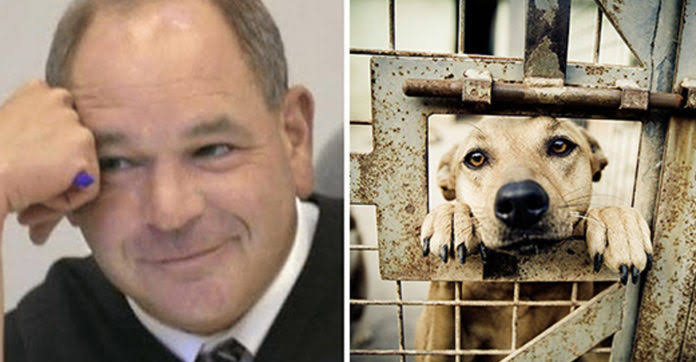 It never gets any less heartbreaking for animals lovers when we hear about these creatures being hurt or neglected. Advocates and organizations do their best to help animals in need and prevent abuse, but when it comes to the laws regarding abusers, they don’t have control. That’s where Michael Cicconetti comes in.

The judge from Painesville, Ohio, is an animal lover himself, and he’s more than tired of seeing abusers and repeat offenders receiving little to no punishment for their actions. That’s why he’s taken to giving them creative sentences that fit their particular crimes. And while he says his punishments wouldn’t be considered cruel or unusual, he adds “that doesn’t mean that they can’t deal with a little discomfort and embarrassment.”

For example, one woman found herself in Cicconetti’s courtroom after her dog was found living in filth. The judge concluded it was only fitting that she be forced to spend a day in filth as well:

“I want you to go down to the county dump, to the landfill, and I want them to find the stinkiest, smelliest, God-awful odor place they can find in that dump and I want you to sit there for eight hours tomorrow, to think about what you did to that dog while you smell the odor. If you puke, you puke.”

Another offender had abandoned 35 kittens in the woods. So Judge Cicconetti gave her jail time, a fine, and ordered her to spend one night in the woods by herself:

Judge Cicconetti hopes that dolling out these creative sentences will spread awareness about animal abuse — and the consequences that come with it. He also hopes mental evaluations will eventually be required for animal-related crimes, and to see the creation of an animal abuse registry. What do you think about his punishments? I, for one, love them!