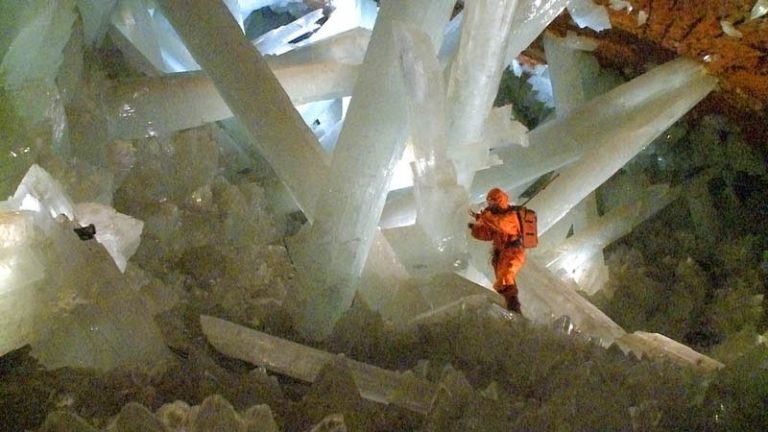 For an estimated 60,000 years, strange life forms have been living inside gigantic crystals at a location in Mexico.

A couple years ago, it was reported that NASA researchers finally managed to revive some of them, leading to a flurry of speculation on what these extremophile, “alien” organisms could teach us.

For years, a team led by director of NASA’s Astrobiology Institute Penelope Boston has explored the Naica Mine in Chihuahua, Mexico searching for extremophiles, organisms that survive and even thrive in the most intense and strange of environments when it comes to factors ranging from acidity to temperature, to lack of nutrients, to lack of sunlight.

Caves as massive as cathedrals can be found at this location in Mexico. However, the most interesting part about the place is definitely the fact that it is filled with gigantic gypsum crystals that make you feel like you’re the size of a flea.

Not only are those giant gypsum crystals visually striking to the point of being disorienting, but tiny “bugs” were discovered inside them, in a preserved state of “geolatency,” where living organisms stay stuck and viable to study in geological materials for extremely long periods of time.

“Much to my surprise we got things to grow,” said Dr. Boston. “It was laborious. We lost some of them – that’s just the game. They’ve got needs we can’t fulfill. That part of it was really like zoo keeping.”

While they were described as “bugs,” mostly bacteria were found, and it was at least 100 different kinds. They were trapped straight inside the crystals, and they are thought to have been trapped there for between 10,000 and 60,000 years.

A whopping 90% of these life forms have never been seen before at all.

The beautiful system of caves lies directly above a quite large pocket of volcanic magma. Geothermal heating raises the temperature in there as high as 140 degrees Fahrenheit, or 60 degrees Celsius. Some astrobiologists call it “hell.’

The factor of heat probably allowed for those giant crystals to form. According to the Nation:

“Most life could not survive there but scientists have discovered some organisms have evolved to feed on the sulphides, iron, manganese or copper oxide in the cave.”

“They’re really showing us what our kind of life can do in terms of manipulating materials,” continued Dr. Boston.

“These guys are living in an environment where there’s not organic food as we understand it. They’re an example at very high temperatures of organisms making their living essentially by munching down inorganic minerals and compounds. This is maybe the deep history of our life here.”

It’s this type of thing that does increase the probability of life existing on other planets and in other solar systems. Just on our planet Earth, just about every conceivable type of life form that can exist, does exist. Think of a shape, or a feature of some creature: it exists. Somewhere in the ocean, it exists. Somewhere out there in the savanna or in the mountains, that life form thrives if you can imagine it.