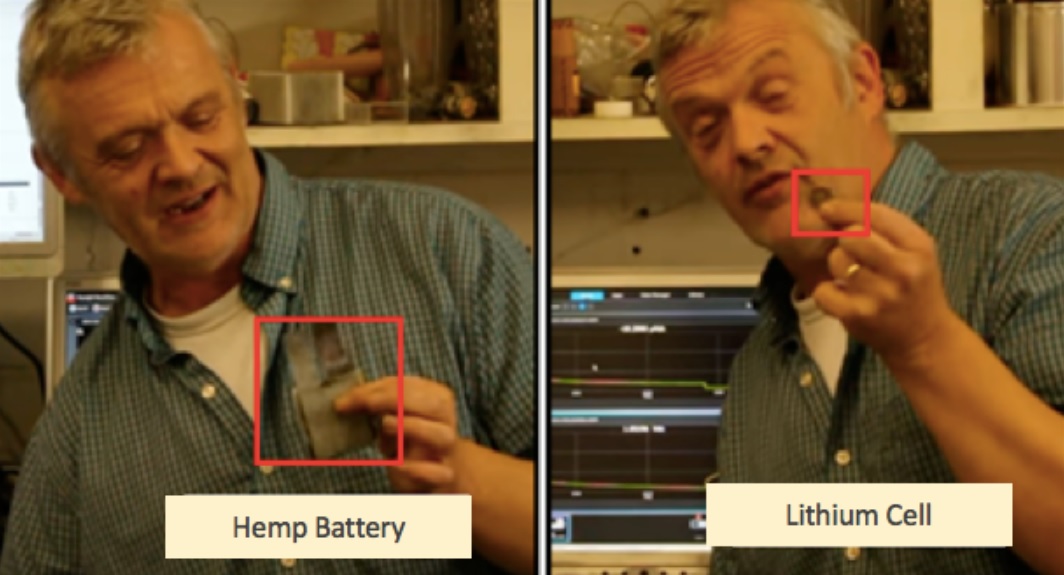 An experiment was conducted to perform a comparison check on the performance of hemp batteries and lithium batteries.

Hemp is an incredibly versatile crop. Not only can it be used for industrial purposes, clothing, food, and paper, but new research suggests hemp batteries are even more powerful than lithium and graphene.

The experiment was conducted by Robert Murray Smith and was discussed on his relatively popular YouTube channel. Smith began by observing a Volts by Amps curve of both the hemp and lithium batteries. Surprisingly, the power underneath the hemp cell was a value of 31 while that of the lithium cell had a value of just 4.

Smith doesn’t claim to have proven anything. Rather, he says the results of the experiment simply show the performance of the hemp cell is “significantly better” than the lithium cell.

Watch the video below:

This discovery isn’t new. In 2014, researchers in the US found that waste fibers — “shiv” — from hemp crops can be transformed into “ultrafast” super capacitors that are “better than graphene.” For those who are unaware, graphene is a unique synthetic carbon material that is lighter than foil, as well as bulletproof. The main limit to using it is feasibility. Fortunately, hemp costs one-thousandth of the price of graphene.

“People ask me: why hemp? I say, why not?” said Dr. Mitlin. “We’re making graphene-like materials for a thousandth of the price – and we’re doing it with waste.”

In the 2014 experiment, the team, led by Dr David Mitlin of Clarkson University, New York, “cooked” leftover bast fibre — the inner bark of the plant that typically ends up in landfills — into carbon nanosheets. The process is called hydrothermal synthesis.

The fibers were then recycled into supercapacitors, or energy storage devices which have changed the way electronics are powered. Conventional batteries store large reservoirs of energy and drip-feed. Supercapacitors, on the other hand, rapidly discharge their entire load. As a result, the latter is ideal in machines that require sharp bursts of power.

“People ask me: why hemp? I say, why not?” said Dr. Mitlin. “We’re making graphene-like materials for a thousandth of the price.”

According to Mitlin, “you can do really interesting things with bio-waste”. With banana peels, for instance, “you can turn them into a dense block of carbon – we call it pseudo-graphite – and that’s great for sodium-ion batteries. But if you look at hemp fibre its structure is the opposite – it makes sheets with high surface area – and that’s very conducive to supercapacitors.”

After the bark has been cooked, “you dissolve the lignin and the semicellulose, and it leaves these carbon nanosheets – a pseudo-graphene structure.” The resulting supercapacitors operate at a broad range of temperatures and a high energy density.

The peer-reviewed journal paper ranks the device “on par with or better than commercial graphene-based devices.”

“They work down to 0C and display some of the best power-energy combinations reported in the literature for any carbon,” Mitlin explained. “For example, at a very high power density of 20 kW/kg (kilowatt per kilo) and temperatures of 20, 60, and 100C, the energy densities are 19, 34, and 40 Wh/kg (watt-hours per kilo) respectively.” When fully assembled, the energy density is 12 Wh/kg, which can be achieved at a charge time less than six seconds.

In 2018, the Texas-based electric motorcycle company Alternet announced that it would be joining forces with Mitlin to power motorbikes for its ReVolt Electric Motorbikes subsidiary.

Clearly, hemp is a valuable and versatile resource. As the crop is decriminalized, perhaps other companies will follow suit and help transition our planet to run on sustainable energy.