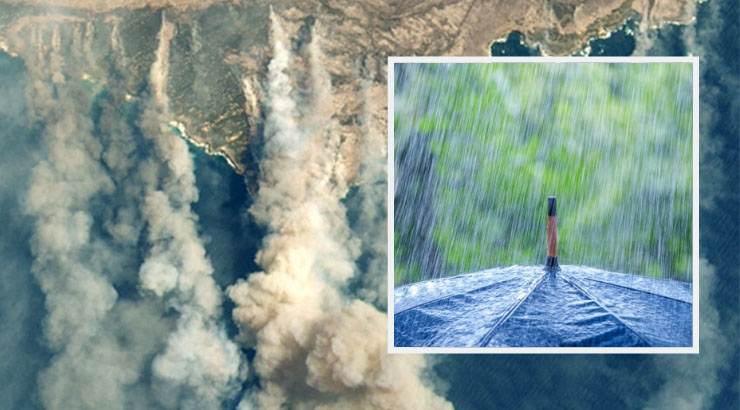 Australia is beginning to receive its first significant rainfall in months as a low-pressure system sweeps in from the east bringing a much-needed respite to parched and fire-ravaged regions across the country.

On Thursday morning, downpours already began extinguishing 32 fires across the hard-hit state of New South Wales (NSW) with the number of blazes dropping from 120 to 88, the Daily Mail reports.

Communities in NSW and Victoria are both expected to see a healthy weekend of rain from Thursday into the weekend with forecasters saying that heavy downpours and thunderstorms in the region are likely.

The Bureau of Meteorology said that it expects anywhere from over an inch (30mm) to over 3 inches of rain through the weekend in eastern Australia.

According to Sky News, a month’s worth of rain fell over Melbourne in only a few hours.

Earlier this week, the NSW Rural Fire Service tweeted that the rainfall would be “all of our Christmas, birthday, engagement, anniversary, wedding and graduation presents rolled into one.”

If this @BOM_NSW rainfall forecast comes to fruition then this will be all of our Christmas, birthday, engagement, anniversary, wedding and graduation presents rolled into one. Fingers crossed. #NSWRFS #nswfires pic.twitter.com/R9VfD0bqu2

“It’s the most positive forecast the RFS has had in months and will give crews a chance to regroup and work on containment lines.“

However, due to an extended drought period this weekend’s rain is unlikely to put out all of the fires which authorities have warned could continue raging thru March.

The bureau also warned that while the rain can help with the fires the risk of other calamities has increased. Bureau meteorologist Sarah Scully said Wednesday:

“Hopefully some of this heavy rainfall will fall over fire sites and help control or even extinguish fires.

But it’s a bit of a double-edged sword because heavy rainfall and gusty thunderstorms bring the potential for flash flooding, particularly in the burnt-out areas of NSW and Victoria which are now vulnerable to landslips and trees coming down.”

The hit & miss nature of #thunderstorms means it's difficult to forecast exactly where the heaviest rain will be—some parts of #bushfire & #drought affected eastern Australia could see 50–100 mm over the next few days; while others may see very little https://t.co/T7MYuIdxkO pic.twitter.com/zgmiBmqcIG

The rain could also bring a new calamity to the country by washing toxic ash into waterways potentially leading to mass fish deaths and contaminating the drinking water supplies for millions of people.

Prof Stuart Khan, an environmental engineer and water expert at the University of New South Wales, told the Guardian:

“We are in a vulnerable position with all that ash sitting on a catchment that’s unstable and prone to erosion that could include landslides and trees being dislodged.

We’re not expecting extreme rainfall, but if any places do and they’re areas that have been burned, then we’d expect ash and soil running into waterways.”

Since the fire crisis broke out in September, at least 28 people have been killed and countless others forced to evacuate—sometimes more than once—as the unprecedented wave of bushfires swept across the country. The fires have consumed upwards of 25.5 million acres (10.3 million hectares) of land, an area equal to the size of South Korea.

Over 2,000 homes have also been destroyed during the crisis with more than half being destroyed by the nightmarish blaze since January 1.