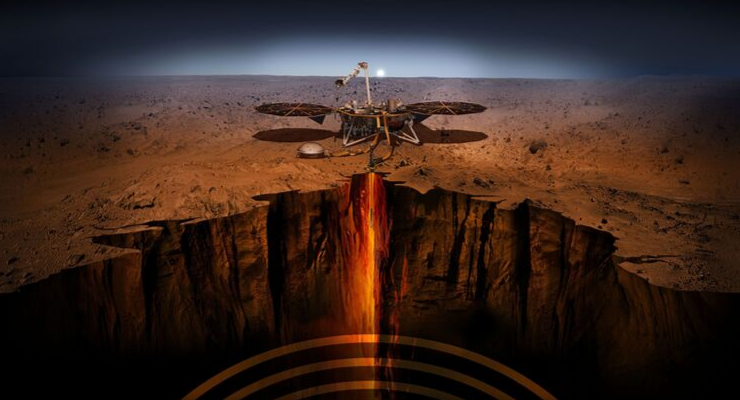 NASA’s robotic space rover has made a shocking discovery on Mars which, while puzzling to researchers so far, may be key to understanding the unique environment of the Red Planet.

The InSight space rover designated to study Mars has discovered strange magnetic pulsations on the surface of the planet at midnight. The bizarre bursts of magnetic energy were detected by the magnetometer attached to the cutting-edge spacecraft, reports National Geographic.

Since last November, the InSight capsule has gathered information about the planet’s evolution and make-up, as well as recording its tremendous “Marsquakes,” measuring its upper crust’s temperature, and gauging the planet’s magnetic field.

But at a joint meeting of the American Astronomical Society and European Planetary Science Congress (EPSC), it was revealed that not only were there these strange pulses that “jiggled” the magnetic field, but the crust of Mars is also far more magnetic than researchers had expected.

The lander’s data also revealed that about 62 miles below the planet’s surface lies a 2.5-mile-thick layer of some electrically conductive substance. While scientists are less than certain, some are speculating that the layer could potentially be a massive body of water, either consisting of dissolved solids, or water and ice—and it may even be possible that the layer stretches across the entire planet.

Dave Brain, an atmospheric and space physics scientist at the University of Colorado who is familiar with InSight’s data, noted that because the rover can only dig as deep as 16 feet below the surface, it remains to be proven whether or not such vast water reserves exist. In the future, however, scientists will hopefully find other ways to find out what is causing the signals from the potential watery layer.

What also makes the discovery especially enticing for space scientists is the fact that Mars, unlike our planet Earth, suffered a collapse in its global magnetic field roughly four billion years. Lacking that crucial shield to defend itself from the sun’s solar winds, the planet was stripped of its atmosphere and became what it is now: a cold desert with bone-dry water reservoirs that’s incapable of supporting life.

However, InSight has been able to measure strong magnetic signals from the rocks lying near it which are both more stable and up to 20 times strong than what had been predicted based on past measurements taken from orbit.

The scientists involved with the work haven’t yet identified whether these rocks lie deep underground or are closer to the surface—an important distinction to make, because if the rocks are younger and near the surface, this would mean that Mars’s magnetic field lasted far longer than scientists currently believe.

While the data hasn’t yet undergone a peer review, the information gained in less than a year before the InSight robot landed on Mars has been stunning.

“We’re getting an insight into Mars’s magnetic history in a way we’ve never had before.”