It was found buried more than three decades ago on the muddy banks of the Potomac, the legendary river between West Virginia and Washington in the United States: a strange “sediment organism” that could do things no one had ever seen before in bacteria.

This unusual microbe, which belongs to the genus Geobacter, first became known for its ability to produce magnetite in the absence of oxygen, but over time scientists found that it could also produce other things, such as bacterial nanowires that conduct electricity.

For years now, researchers have been trying to find ways to make sense of this natural gift, and they may have just made a breakthrough with a device they call ‘Air-Gen.’ According to the team’s own claims, their device can generate electricity from … well, almost nothing. 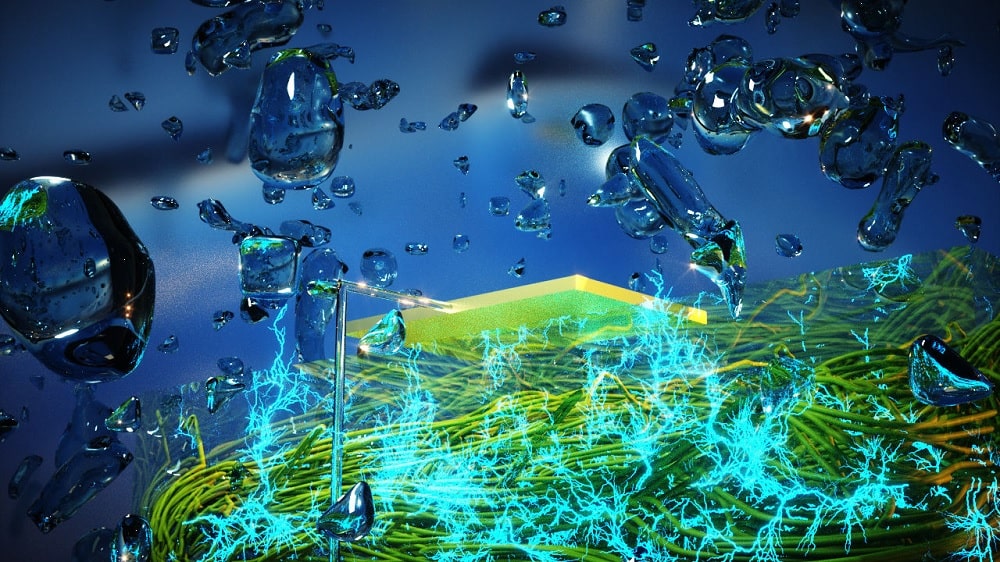 Generating electricity with the help of bacteria

“We are literally making electricity out of nothing,” says electrical engineer Jun Yao of the University of Massachusetts Amherst. “The Air-Gen is generating clean energy around the clock.”

The statement may sound like an exaggeration, but a new study by Yao and his team describes how the air-powered generator can actually generate electricity with nothing but air around it. It’s all thanks to electrically conductive protein nanowires formed by Geobacter bacteria (in this case, G. sulfurreducens).

The Air-Gen consists of a thin film of protein nanowires with a thickness of only 7 micrometers, positioned between two electrodes and exposed to air at the same time.

Due to the exposure to air, the nanowire film is able to bind the water vapor present in the atmosphere, allowing the device to generate a continuous electric current that is conducted between the two electrodes.

The team believes that the electric charge is likely generated by a moisture gradient that causes a distribution of protons into the nanowire material.

“We hypothesize that this charge diffusion generates a balancing electric field or potential that corresponds to the resting membrane potential in biological systems,” the authors explain in their study.

“A persistent moisture profile, fundamentally different from any previously known system, explains the continuous voltage output of our nanowire device.”

The discovery was made almost by accident when Yao suddenly noticed that devices he was experimenting with seemed to conduct electricity all by themselves.

“I found that the devices produced a current when the nanowires were brought into contact with the electrodes in a certain way,” Yao says.

“I found that exposure to humidity was essential and that the protein nanowires absorbed water and generated a voltage waveform across the device.”

Previous research has demonstrated the generation of hydroelectricity using other types of nanomaterials – such as graphene – but these experiments have largely always produced only short bursts of electricity, lasting at best a few seconds each.

In contrast, the Air-Gen produces a sustained voltage of about 0.5 volts at a current density of about 17 microamperes per square centimeter. That’s not a lot of energy in absolute terms, but according to the team, plugging in multiple devices at once could generate enough power to charge smaller devices such as smartphones and other personal electronics – all without wastage or residue, and with only a little humidity (sufficient even in regions as arid as, say, the Sahara Desert).

“The ultimate goal is to make large-scale systems,” Yao says, explaining that future efforts could use the technology to power homes via nanowires integrated into wall paint, for example.

“I anticipate that once we reach an industrial scale for wire production, we’ll be able to make large-scale systems that make an important contribution to sustainable energy production.”

If anything makes it difficult to realize this seemingly incredible potential, it’s the limited amount of nanowire that G. sulfurreducens produces.

Related research by one team member – microbiologist Derek Lovley, who first identified Geobacter microbes back in the 1980s – may have a solution: Genetically engineering other bacteria, such as E. coli, to achieve the same process on a very large scale.

“With this new adaptable process, lack of protein nanowire supply will no longer be a barrier to developing these applications.”

The findings are published in the scientific journal ‘Nature’.

So far, the “air gene” is still in an early stage of development. However, the scientists hope that the device will soon be ready for the market. As a next step, they plan to operate small electronic devices such as fitness watches. They also want to develop air generators for cell phones that could make regular charging unnecessary.