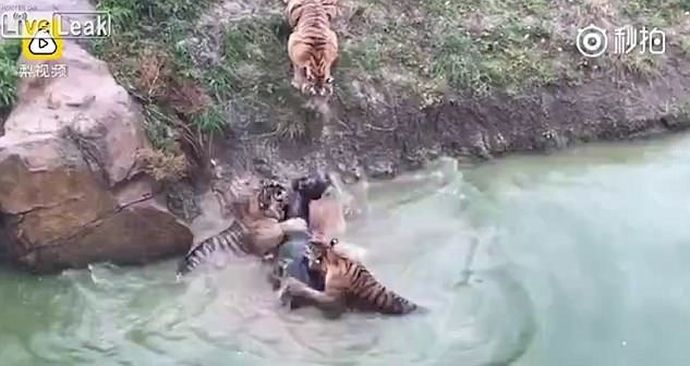 Animal cruelty, it seems, has become the accepted norm in China. More than 10,000 cats and dogs are attacked, tortured, and skinned/ burned alive during the 10-day-long annual Yulin Dog Meat Festival. In March, the world was shocked to see a dog tied to a tree howling in pain as the helpless canine was skinned alive. Now, another horrific tale of animal slaughter is being reported from China.

In one of the most brutal examples of animal cruelty, Chinese zookeepers were filmed by horrified visitors pushing a live donkey into an enclosure filled with hungry tigers. After finding itself in the jaws of the ferocious predators, the terrified donkey attempts to escape but is soon dragged by the neck by one of the tigers.

It is then double-teamed by two of the tigers – believed to be kept at Yancheng Wild Animal World in the city of Changzhou in eastern China – both of which bite its head as it frantically splashes around in the muddy water. Despite putting up a valiant attempt at defense, the donkey is savagely beaten and killed ruthlessly in less than 30 minutes.

Local media reported that the zookeepers next tried to throw a sheep into the enclosure, but a row between owners of the zoo led to security arriving to put a stop to the live feeding.

CCTV footage of the cruel incident has gone viral. You can watch the disturbing 1-minute video below. Warning: It is very graphic…

In China Trapped Live Animals Are Sold As Keychains 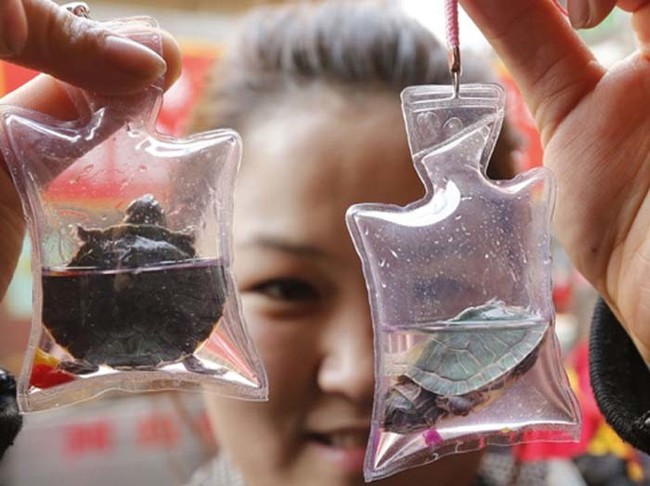 In China, live fish, turtles and other amphibians are being sold as keychains and mobile phone charms. For the accessories the  animals are fully sealed within small plastic bags, causing animal rights groups to condemn the practice as ‘cruel’.

Most commonly sold outside of train and subway stations in the major cities, the animals can be seen paddling/swimming within a small amount of colored water. Reportedly, the keychains can be bought for as little as $1.50. 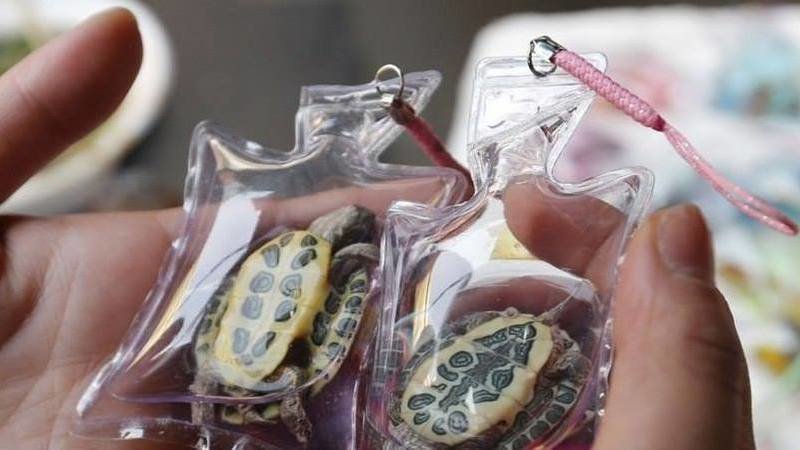 Venders have claimed that each keychain contains enough crystallized oxygen and nutrients to keep the animals alive. 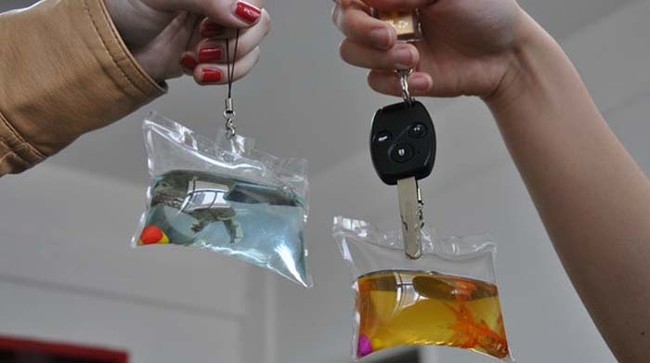 Sealed within the bags is either a fish, young Chinese soft-shell turtle—which as adults are popular within Chinese dishes— or an amphibian. 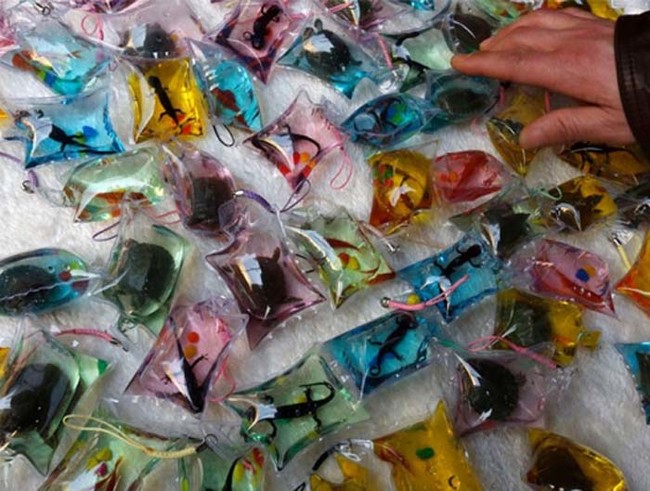 Within the bag, the animals can survive no longer than a few days. A vendor told CNN, that the animals must be cut out of the bag before the air runs out, otherwise they would suffocate. 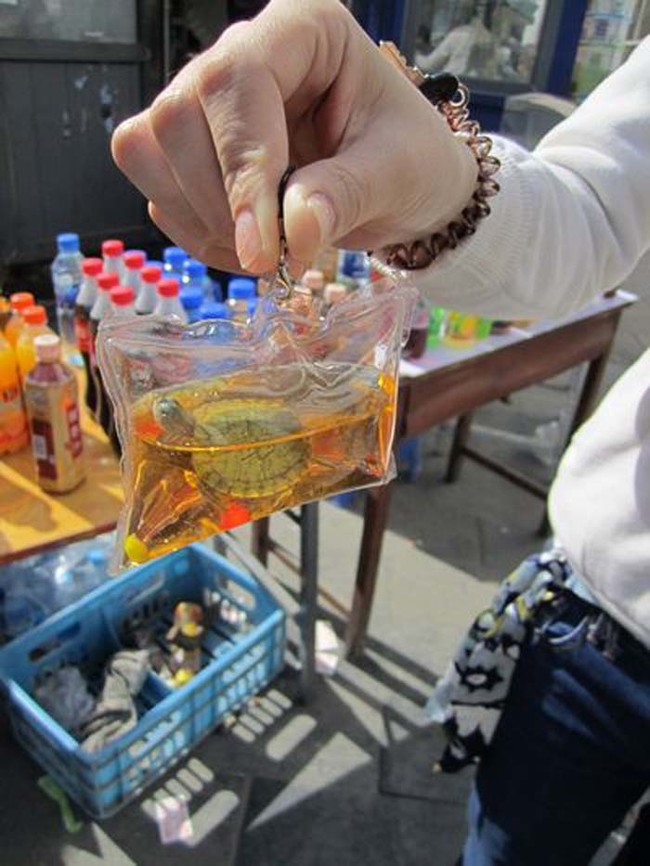 Animal rights groups have dubbed that keychains ‘inhumane’, and have highlighted that more animal protection laws are needed within the country.

Although many petitions aimed at banning the keychains have circulated, the small animals are still being contained and sold within their plastic coffins. 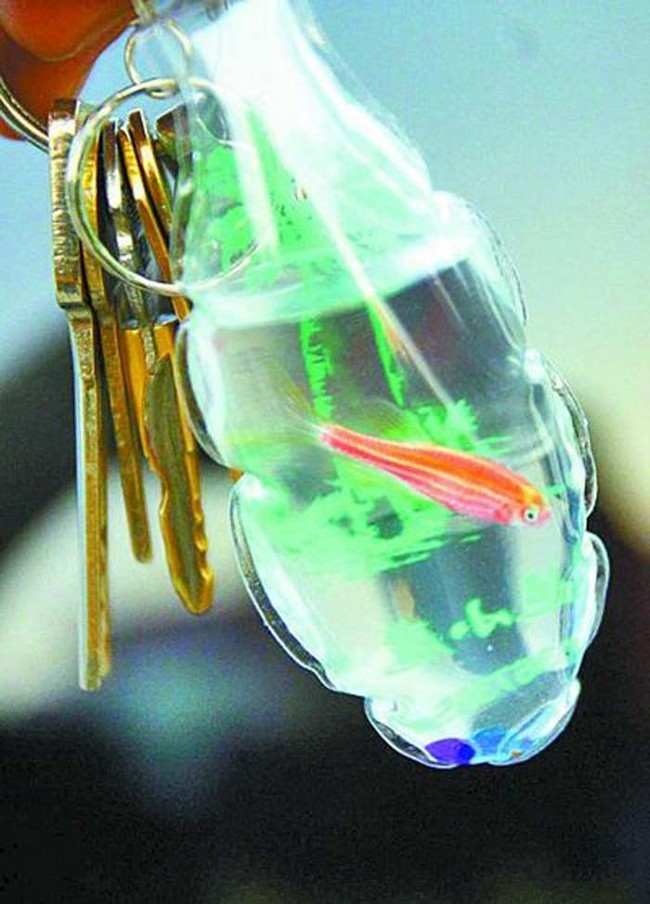 The keychains are particularly popular with young people, who reportedly see them as fashionable accessories.

The manufacture and sale of the keychains is a practice of severe animal cruelty, and an almost certain death sentence for many of these tiny creatures. Unfortunately, these keychains are likely to remain being sold on the streets of China. It is time for China to implement meaningful animal cruelty laws, and recognize the importance of treating all living animals with care and respect.

PLEASE CLICK THE LINK BELOW, AND SIGN THE PETITION TO STOP THIS. It takes less than a minute