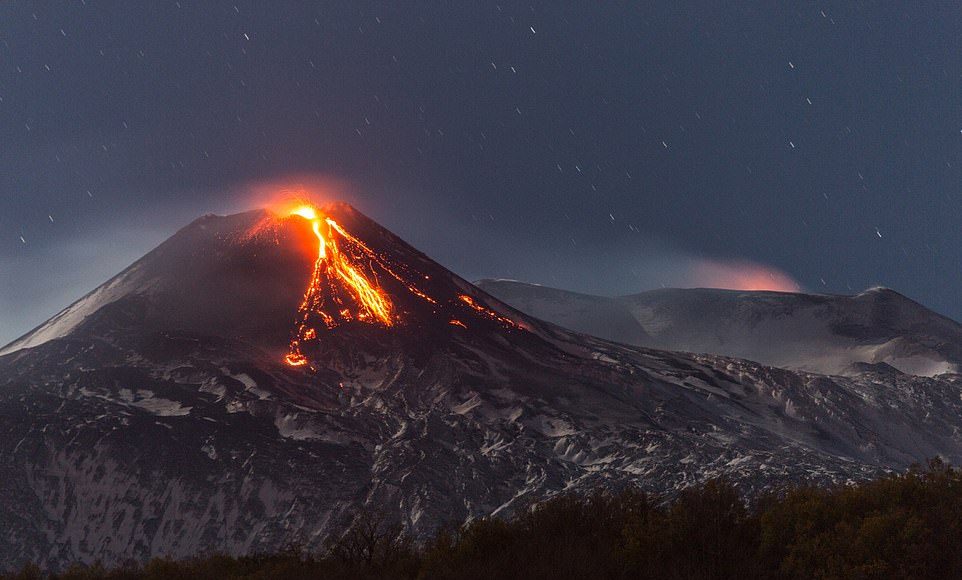 MOUNT ETNA, Europe’s largest volcano, has been rocked by a “massive explosion” sending huge plumes of ash into the skies after 130 shocks in four just hours.

Mount Etna in Sicily was spitting out lava and columns of ash on Christmas Eve after the volcano initially reawoke in late July. Shocking posted by residents show billowing black and grey smoke spewing over the blue skies after Europe’s higest volcano blew her top.
The eruption is causing a seismic swarm in Sicily, in the province of Catania, where several tremors of 3.9 magnitude were felt by the population. Residents reported feeling “many little earthquakes” across the region, including Catania,before the explosion.

A Twitter user posted: “Ms Etna is performing a Christmas show. Many little earthquakes in the last few hours.”

Timelapse video of the outbreak:

One posted: “#MerryChristmas from Mount Etna who decided to wake up this morning for the festivities… ”

A meeting of the crisis unit of the airport has been scheduled.

On Etna, the sensors of the Institute of Geophysics and Volcanology of Catania recorded a seismic swarm of 130 shocks, the strongest of which exceeded magnitude 4 after 9am.

Mount Etna, at 3,330 metres (10,926 feet), is the highest volcano in mainland Europe and is considered to be one of the most active in the world.

The eruption may appear to be small but there have been dangerous blasts in recent years as ten people were injured including a BBC camera crew in March 2017 when spewing lava exploded on impact with snow.

Etna is in an almost constant state of activity but has remained slightly dormant over the past two years.

The volcano lies above the convergent plate margin between the African Plate and the Eurasian Plate.

In 2013, Etna was added to the list of UNESCO World Heritage Sites.